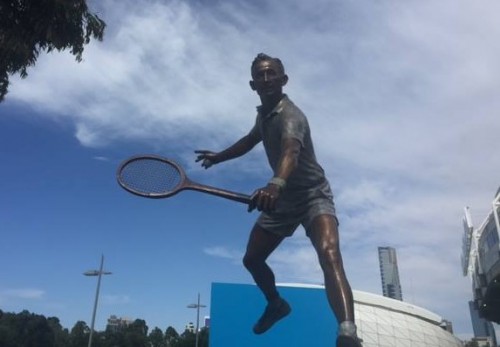 The legendary Rod Laver, the only person to have won two calendar-year Grand Slams, has been immortalised in bronze at Melbourne Park.

The new likeness was commissioned by Tennis Australia.

Speaking at the unveiling in advance of the 2017 Australian Open, Tournament Director Craig Tiley stated “Rod Laver is undoubtedly one of the greatest tennis players the world has ever seen, and we are delighted to further honour his achievements with this stunning work of art.

“As one of Australia’s most revered sporting figures it’s only fitting that Rod Laver welcomes the public to ‘his’ arena, whether it’s for the Australian Open or the many other concerts and events staged there every year.

“This spectacular sculpture, which captures the essence of Rod Laver, will be a tribute to his contribution to tennis in Australia and around the world for generations to come.”

Also speaking at the revealing of the statue, Laver stated “ think there’s very much a likeness. It brings me back to the 60’s when my competing days were at full swing.

“To be at the Rod Laver Arena and to now unveil this statue with the sculptor … is a big honour, for both of us to share what we’ve got now. All credit to Lis Johnson (the sculptor), she’s done a great job and really captured the essence of my game.

“It’s a thrill, thanks to Tennis Australia. You’d never think when you’ve got a little wooden racket, that something like this would happen to an individual.

“When you look back at all the great champions we’ve had here, who have come along with me, I’m thrilled to know that through them I became a player.

“I was one of the smaller players and the great thing about retirement is that the writers and the artists enlarge your reputation.

“I hope the new sculpture will bring more crowds to Melbourne Park. And maybe encourage people to pick up a racquet and play the game. I think good public art lifts the spirits and inspires the soul.” 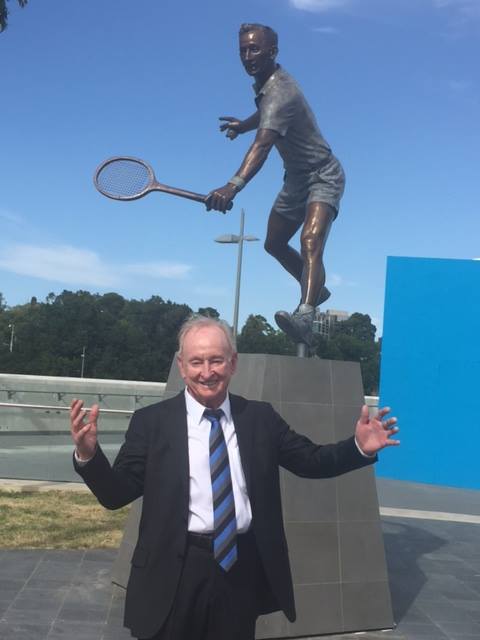 Artist Lis Johnson, creator of many of Melbourne’s best known sporting sculptures, was initially apprehensive at the prospect of reproducing such a universally renowned figure.

Johnson explained “Rod Laver’s international iconic status is daunting and I was anxious about creating a worthy tribute.

“Meeting Rod Laver has been both an honour and a great pleasure. I’m so excited he’s happy with the final result.

“Rod welcomed me into his home, helped me with my research, answered all my queries, let me measure his head with my strange instruments and generously gave me access to all his photos.

“It’s always challenging to try to convey athleticism and dynamism in a static solid material, but this sculpture was the most difficult I’ve tackled, with the action pose almost impossible for my life-models to hold, so I had to use my imagination and understanding of anatomy.

“I focused on trying to get the right kind of energy, and importantly ensure the sculpture worked and looked interesting from every angle.”

This marks the start of a very busy year for the man many call the greatest player of all time, with the inaugural Laver Cup, a tournament named in his honour and featuring the stars of Europe against the rest of the world, taking place in the Czech Republic capital of Prague in September.