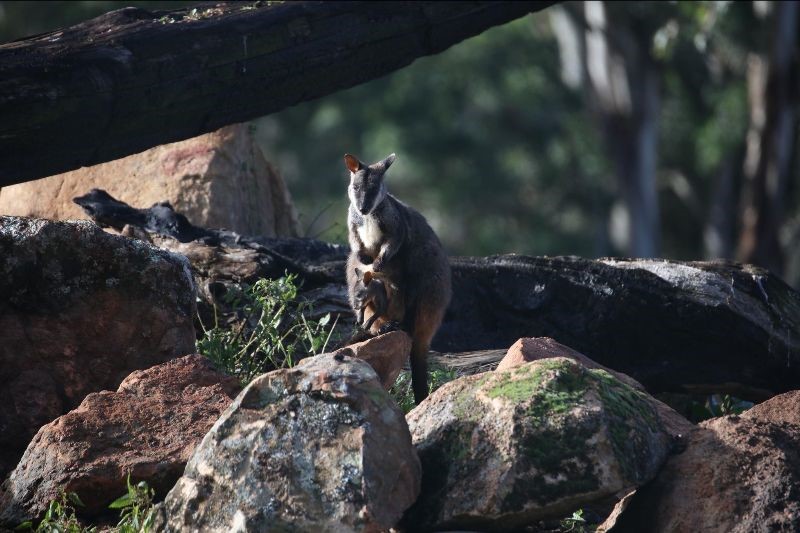 NSW Department of Planning Industry and Environment (DPIE) Senior Threatened Species Officer Dr. Deb Ashworth said the duo are the newest members of the NSW Government’s captive breeding population aimed at securing the future of this threatened species in the wild.

Dr Ashworth advises “the brush-tailed rock-wallaby was once common throughout its range in NSW. Sadly, as a result of predation by foxes and wild dogs, competition with feral goats and ongoing drought conditions, these beautiful wallabies are now considered an endangered species in NSW.

“We’re ecstatic that our captive breeding program with Aussie Ark has successfully produced two new animals. While these pouch young are yet to take their first hops, they already have an important role to play in the long-term conservation of their species.”

The joeys have been spotted poking their heads out of their mother’s pouches.

Aussie Ark president Tim Faulkner said the Aussie Ark team are closely monitoring the joeys and are happy to report they are healthy and being well looked after by their mums.

Faulkner adds “the birth of these joeys is a fantastic achievement, both for Aussie Ark and for the species as a whole. With the number of wild brush-tailed rock-wallabies in continual decline, these joeys offer a glimmer of hope for the future of the species.

“These joeys will remain safe in our purpose-built facility at Barrington Wildlife Sanctuary, protected from foxes and other predators, until they are old enough to be released back into a wild or enter the breeding program themselves.”

This program is an integral part of the NSW conservation plan for brush-tailed rock-wallabies which aims to reverse the decline in population numbers by reducing pests and reintroducing captive-born animals to suitable habitats.