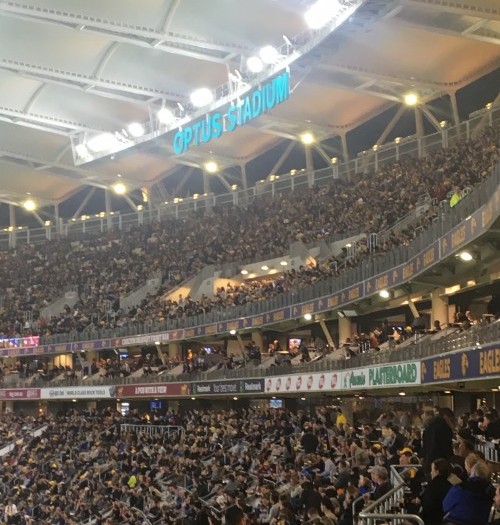 Interim results released for the 2018 AFL season at Perth’s Optus Stadium show that marketing strategies for the new venue have injected millions of dollars into the Western Australian economy.

Despite a decline in international visitor numbers and expenditure to Western Australia in 2017/18, about 66,000 interstate and intrastate visitors attended games regular AFL season and finals at the 60,000 capacity venue, delivering nearly $66 million in visitor expenditure.

Figures from research undertaken by Metrix Consulting show that of the 31,059 interstate visitors, 22,887 travelled during the regular season and 8,172 during the AFL finals. There was a similar story with intrastate overnight visitors, as 25,812 people from regional WA travelled to Perth for AFL games during the home and away season, and 8,853 for the finals.

As part of the Optus Stadium launch, Tourism Western Australia invested significant marketing resources to drive interstate visitation to AFL games and increase awareness of Perth and Western Australia as an AFL tourism destination, while encouraging visitors to also travel to the regions.

The multimillion dollar Hotel Perth campaign launched early this year targeted at east coast markets such as Melbourne and Sydney. This campaign, coupled with the introduction of a Tourism WA east coast advocate has led to a direct increase in visitors.

"Maximising leisure visitation from AFL games at Optus Stadium and encouraging visitors to stay longer and spend more is a key component of the State Government's Two-Year Action Plan.

"The AFL campaign also complements other activity on the east coast including establishing trade marketing representation in Melbourne, Sydney and Brisbane; launching the Hotel Perth campaign and co-operative marketing with key partners, all of which have contributed to an increase in interstate visitors in 2017/18."