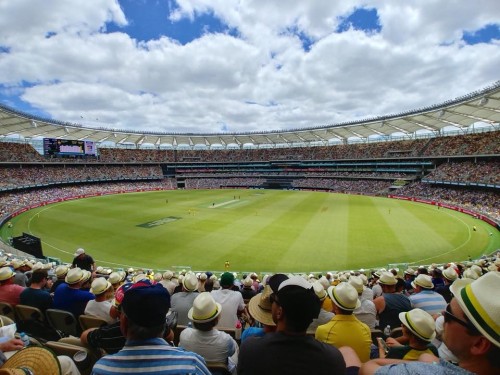 53,781 fans packed the venue for Sunday’s One Day International cricket match during which England beat Australia by 12 runs.

Prior to the match, former Australian cricket captains Mark Taylor and Michael Clarke were impressed by the playing surface after inspecting the pitch for broadcaster Channel 9.

Clarke stated “the curators deserve a lot of credit; the ground is in unbelievable nick.”

As with last Sunday’s community open day, fans were overwhelmingly positive about the venue and their experience, although some did encounter some opening day issues.

Complaints were made about the food and drink service, with some customers claiming pricing and long queues were an issue. A technical problem was supposedly to blame for overprice meat pies and sausage rolls (although Optus Stadium emphasised that no customer was overcharged), while some were unhappy at having to endure lengthy queues for food and drink.

Following concerns that it may struggle to handle the rush of passengers flocking to and from the venue, the public transport network coped well early in the day before some delays were experienced after the game.

The ground emptied quickly after England’s victory, with the majority of fans exiting within 20 minutes as they made their way to taxis, trains and buses.

Full access to the new venue won’t be available until the anticipated mid-year opening of a pedestrian bridge linking Optus Stadium with East Perth.

Until crowds at some mid-week events are likely to be capped.

Meanwhile, the venue’s aim to “set a new benchmark” for disability access with a “five-star experience” for the entire community has also been revealed.

Features include 60 purpose-built permanent ACROD bays within the venue and surrounding precinct as well as 28% more wheelchair positions than required in the 2013 National Construction Code, and an additional 327 enhanced amenity seats for people who have mobility requirements that are not in wheelchairs.

Visitors will also benefit from three changing places toilets for users requiring specialised assistance have been installed across the venue, 60 universal access toilets and a total of 12 lifts throughout the venue.

Welcoming the access, Western Australian Sport and Recreation Minister Mick Murray stated “Optus Stadium is truly a venue for all Western Australians. The attention and hard work that has gone into the disability access features really is one of the most special things about this venue.

“This is a special step for disability inclusion and access in this State – where we have succeeded in not just meeting the requirements, but exceeding them.”