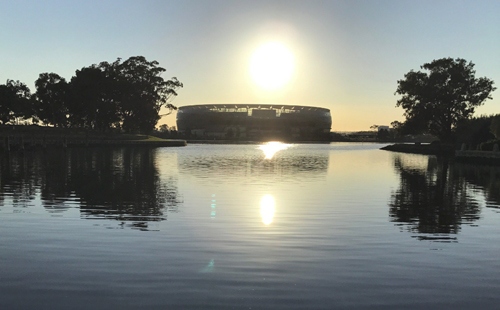 After months of speculation, the management of Perth’s Optus Stadium has today confirmed that the first sporting event at the new venue will be the Gillette One-Day International (ODI) between Australia and England on Sunday 28th January 2018.

Set to be held almost two months ahead of the original target opening date of the start of the 2018 AFL season, the ODI is expected to be a sell-out, entering the record books as the highest-attended sporting match in Western Australian history.

Part of an impressive calendar of world-class events at the new venue. the match will be the first of many cricket events held at Optus Stadium with the Western Australian Government, Cricket Australia and the WACA agreeing that all Test matches and limited overs matches featuring England, South Africa and India - plus Big Bash League Twenty20 matches - will be played at the venue from 2018.

The fixture will also provide the first opportunity for interstate and international visitors to experience a sporting event at Optus Stadium and is expected to attract English cricket fans looking to continue their Australian summer of cricket once the Ashes Series finishes.

Optus Stadium Chief Executive Mike McKenna said today’s announcement ended months of speculation, advising “we are delighted that the first sporting event at Optus Stadium will be an international event between two of the most fiercely competitive teams in the world.

“Cricket fans will be among the first to experience and enjoy the amazing fans first facilities at Optus Stadium. No matter where they sit, fans will enjoy outstanding views of the action and easy access to premium food and beverages and restroom facilities.

“With the Australia Day public holiday only two days earlier, it is the perfect opportunity for interstate and regional visitors to take an extended break and enjoy the best of our beautiful city as well as watching Australia and England play world-class cricket.”

In 2016, a prototype drop-in cricket wicket was constructed with the same soil profile as the WACA Ground wicket and tested under match conditions. Following a successful testing phase an additional four wickets were developed, which aim to replicate the character of the WACA Ground wicket.

Cricket Australia requires 'clean venues' for all international cricket matches - meaning the stadium will be referred to as 'Perth Stadium' in all match-related coverage.

Optus Stadium officially opens with a free Open Day on Sunday 21st January 2018, with 110,000 tickets secured by West Australians. The One-Day International will be played the next weekend, followed by an AFL Women’s match on 10th February, Ed Sheeran concerts on 2nd and 3rd March, the Perth NRL Double Header on 10th March, the opening round of the AFL Premiership season on 25th March 2017 and the Nitro Circus on 22nd April 2018.