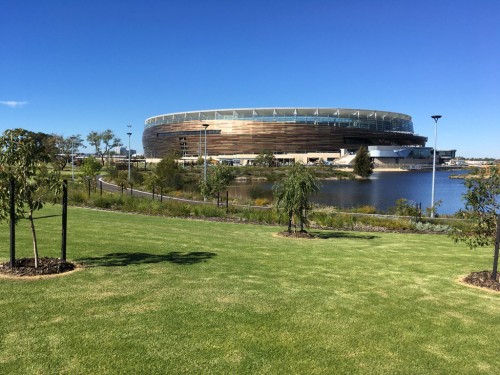 The AFL just released 2018 Premiership Season fixtures list shows that the new 60,000 seat Perth Stadium will host 23 matches during the home and away season.

With blockbuster games scheduled throughout, Round 1 will see the West Coast Eagles take on the Sydney Swans on Sunday 25th March while the Fremantle Dockers will open their Stadium account against Essendon on Saturday 31st March.

In Round 3 Fremantle Dockers play an away game at Perth Stadium when the Gold Coast Suns host a home game transferred due to the 2018 Gold Coast Commonwealth Games.

The much anticipated first Western Derby at Perth Stadium will take place in Round 6 with the two local sides set to meet again in Round 20. Throughout the season there will be a mix of day, twilight and night matches, when fans will enjoy stunning Stadium light shows.

Anticipating that the news venue will attract fans from across the country, Perth Stadium Chief Executive Mike McKenna advised “with 1,000 tickets allocated for travel packages, visiting fans will have an unprecedented choice of tickets.

“While they are in Perth, they will be able to stay in a range of new hotels, enjoy small bars and restaurants throughout the city plus a range of unique West Australian experiences.

“In addition, 6,000 seats will be available for non-members to purchase for each Club’s home games throughout the Premiership season.

“Perth Stadium will deliver unparalleled experiences for all AFL fans week in, week out and we can’t wait to welcome them from next year.”

The Stadium will host the latest in state-of-the-art technology with 4G network coverage, 1,000 IPTV screens and two of the largest super screens in the southern hemisphere. Comfort has been maximised, seats are more than 50cm wide, each one with a cup holder and fans will also enjoy easy access to more than 50 food and beverage outlets with bathroom queues set to be a thing of the past.

With both the West Coast Eagles and the Fremantle Dockers having had extensive input to the design of the venue, negotiations between the Western Australian Government, the teams and the AFL concluded on 22nd October, with fixtures secured football at Perth Stadium from 2018.

Perth Stadium will officially open with a free Community Open Day on Sunday 21st January and the Fremantle Dockers will play Collingwood in Round 2 of the AFLW on Saturday 10th February.

These will be followed by a series of additional world-class entertainment and sporting events before Round 1 of the AFL Premiership Season.