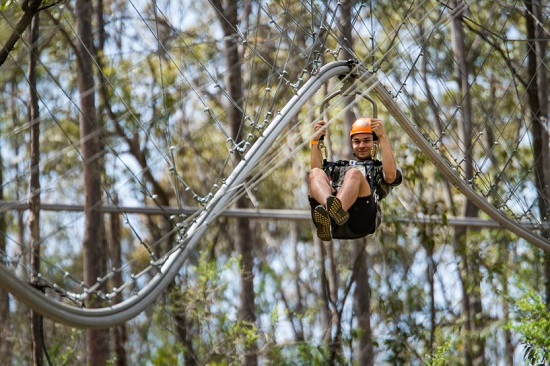 The world’s fastest rollercoaster zip line which sets riders suspended above ground by a harness flying through the air at speeds of up to 50 kilometres an hour has officially opened in Sydney’s west.

Launched on Sunday, the new hair-raising attraction by Australia’s leading eco-friendly high ropes and zipline builder and operator, TreeTops, takes the thrill to the extremes by reaching the maximum possible G-force when attached to a harness as determined by international standards. During the half kilometre ride, which features two adrenalin pumping 360-degree loops, a stomach-churning drop and many twists and turns, riders reach up to a considerable 2.3 G-force.

Riders experience approximately 3 G-force when launching from earth. Called the TreeTop Crazy Rider Xpress, it’s the next generation in zip lining - breaking new ground in having outrageous and unexpected fun while among the bushland of Western Sydney Parklands.

The third and fastest rollercoaster zip line to be constructed at a TreeTops park, the Xpress uses a new harness and pulley system - designed by Australian innovators and Ecoline and TreeTops owners Sandrine Gaymard and Fred Galimard - to increase the speed of the ride. 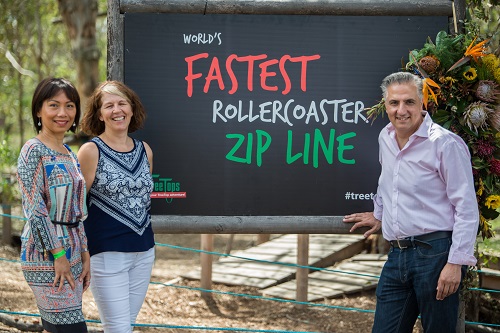 Once harnessed, riders are placed on a pipe-based track which is attached to trees through a system of wires - adding to the ride experience given the track is not rigid like traditional rollercoasters.

TreeTops General Manager, Sandrine Gaymard explains "this ride not only provides plenty of thrills as you weave your way through the trees, but it also provides a new perspective for people to observe the beauty of the Australian bushland.

“Since opening our first adventure park, it was clear that our zip lines are everyone’s favourites – and the faster it is the better. “As a result, we developed the Crazy Rider - a zip line that didn’t just go straight, but around trees, up and down, and even with 360-degree loops to really ramp up the fun factor.

“With the Xpress, we have really upped the WOW-factor through making it faster and increasing the g-force and as a result delivered the next ground-breaking attraction for eco-Tourism which is bound to stimulate tourism to Western Sydney from residents throughout the state plus interstate and international visitors.” 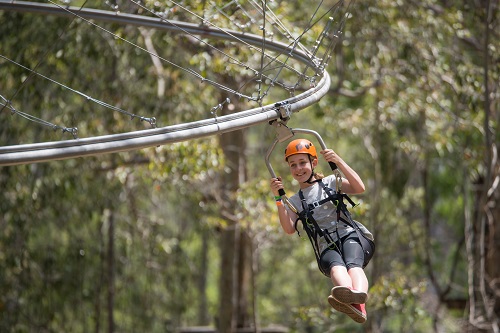 Facts on the new attraction:

TreeTops is the operating division of Ecoline - a highly experienced and skilled company that creates WOW factor tree-based activities for a broad range of ages and physical abilities supported by world’s best safety technologies. It owns and operates TreeTop Adventure Parks in Sydney, the Central Coast and Newcastle and custom design and build high ropes courses for other operators including Taronga Zoo in Sydney. Ecoline has won multiple awards across tourism and business innovation including: 2014 and 2013 Australian Business Awards for Innovation; 2013 Australian Tourism Awards (Silver) and 2015 NSW Tourism Awards (Gold and People’s Choice Award). The company has been Eco-certified under EcoTourism Australia since 2010 and certified ISO9001 since 2017.