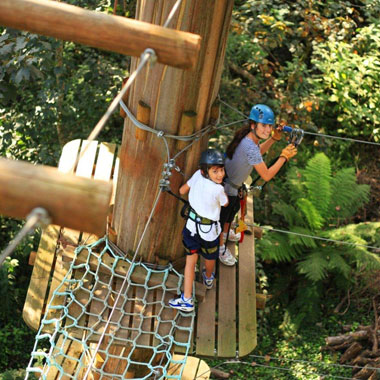 The TreeTop Adventure Park in the Western Parklands has won the award for best New Tourism Development in NSW at the recent 2013 NSW Tourism Awards.

Spanning 32 categories, the NSW Tourism Awards celebrate the diverse and significant achievements of tourism operators, who collectively contribute billions of dollars to the NSW's economy.

Located in the Western Sydney Parklands at Abbotsbury, the TreeTop Adventure Park zipline attraction has, since opening in October 2012, attracted more than 30,000 adventurers.

The park is also home to Australia's newly opened TreeTop Safari a wonderful forest experience and guided canopy tour featuring one of the country's longest flying foxes at 360 metres long and amazing views of Sydney CBD.

On hand to receive the accolade in the New Tourism Development category, the only Western Sydney attraction to receive an award, TreeTop Adventure Park General Manager, Sandrine Gaymard stated "we're delighted to be recognised in the Awards program.

"It's a great win for TreeTop Adventure Park and for Western Sydney because it really puts the spotlight on the type of tourism potential we have in this region.

"We've designed our experiences so that people of all ages can be Tarzan for a day to glide safely from tree to tree, be challenged, and have some adrenalin pumping fun.

"Our recently launched TreeTop Safari shows we want to continue to push the boundaries in design and continue to offer Sydneysiders fresh and exciting outdoor fun."

The Sydney park is the third outdoor action adventure that Sandrine Gaymard and her husband Frederic Galimard have opened under the TreeTop brand. The award winning couple have also designed high ropes adventure courses for seven other operators.

For more information go to www.treetopadventurepark.com.au