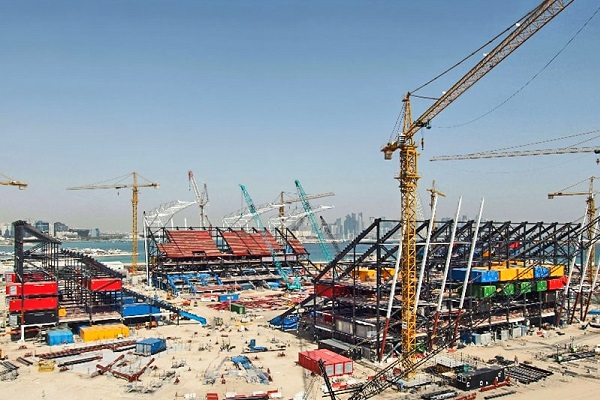 With Qatar's Supreme Committee for Delivery & Legacy (SC) having promoted the sustainable legacy of the 2022 FIFA World Cup, Doha's Ras Abu Aboud Stadium is seen as being a trailblazer in 'pop-up' stadium provision and a potential blueprint for future sports events.

Positioned on an artificial promontory and able to accommodate 40,000 spectators, the venue, which will host host matches up to the quarter-finals stage of the tournament, is being made largely from shipping containers.

Once the tournament is over it will be completely dismantled, with its parts transformed into other sporting facilities in Qatar and overseas.

So far, 923 containers have been delivered to the stadium site out of the 949 required for setting up the arena. The fabrication of steel for the structure is 94% and the development of the steel structure is now 33% complete.

Mohammed Al Mulla, qcting Precinct Director for the Ras Abu Aboud Stadium, advised "it’s an honour to work on such a sustainable project. Sustainability is at the core of everything we do for Qatar 2022 and Ras Abu Aboud exemplifies that commitment. The fact we’ve been able to decontaminate this former industrial site and turn it into a prime seafront location for future generations to enjoy is a great legacy for us.”

Being built on former industrial land close to Doha Port, the Supreme Committee for Delivery & Legacy (SC) has put in a lot of work into rehabilitating the site.

As SC’s Sustainability & Environment Senior Manager, Bodour Al Meer explains “due to the nature of construction at the time the buildings were constructed, many had asbestos within their structures. Asbestos removal specialists were employed, taking exceptional care during the demolition and site preparation phases. Over 65 tonnes of asbestos containing material was removed from the site and safely disposed.

“Soil and groundwater contamination were also present in some locations. Water was run through a specific treatment process before it was used for dust suppression on-site or discharged into the sea, to adhere to Qatar’s strict environmental requirements.” 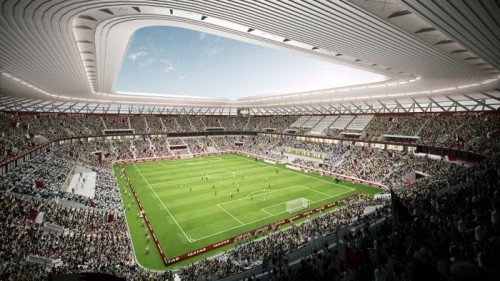 More than 80% of the materials from the demolished buildings were reused or recycled, including metals, electronics, and wood and office/packaging waste. Almost 70,000 tonnes of concrete and asphalt were crushed, tested and stockpiled to use during the construction of the stadium.

The land on which the stadium will sit was also home to trees and vegetation, some of which were more than 30 years old. Keeping the sustainability factor in mind, more than 875 trees were inspected and tagged, and where possible, excavated and removed to the SC Tree & Turf Nursery, which provides the trees and turf for all Qatar 2022 venues.

The stadium has been designed by Madrid (Spain)-based Fenwick Iribarren Architects.

The Ras Abu Aboud Stadium is set to host matches till the quarterfinal stage during the tournament.

Of the proposed eight World Cup venues, one stadium - the Khalifa International Stadium - is already complete while the SC has promised to deliver the remaining venues two years before the tournament kicks off.

Images: Doha's Ras Abu Aboud Stadium under construction (top) and how the venue will look during the 2022 FIFA World Cup (below). Images courtesy of Qatar's Supreme Committee for Delivery & Legacy.