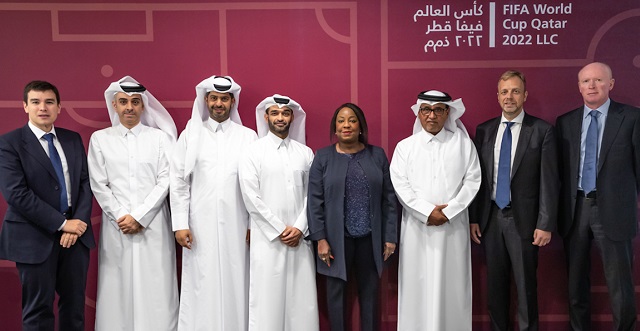 World-football governing body FIFA and the Qatari-Government have announced the formation of a joint venture that will be responsible for the planning and delivery of the 2022 World Cup.

The new entity, known as FIFA World Cup Qatar 2022 LLC, is 51% owned by FIFA and 49% by Qatar's local organising committee.

In a statement, FIFA claimed that the creation of the joint venture - the first time FIFA has entered into such a relationship with a local organising committee - would help fulfil the organisation’s objective “to create an innovative model that streamlines the operational delivery of the World Cup”.

The joint venture is set to focus on the event delivery, while Qatar’s Supreme Committee for Delivery and Legacy will continue to manage the development of the new infrastructure as well as the tournament’s various legacy programs.

The move gives FIFA a greater measure of control over the delivery of its own event, and may pave the way for greater changes to the tournament’s format.

It follows FIFA President Gianni Infantino previously having suggested that Qatar could “share” the World Cup with its neighbours - despite the fact that Saudi Arabia, the UAE and Bahrain have all severed diplomatic relations with the country - in order to facilitate the competition’s expansion to 48 teams.

FIFA Chief Tournaments and Events Officer, Colin Smith, named as the Managing Director of the joint venture explained that it was necessary because of the “opportunities and challenges” of planning a World Cup in Qatar, and signalled that FIFA may look to create similar ventures for future tournaments.

Smith advised "the continuous growth and complexities of a FIFA World Cup and the need for integrated involvement of all key areas across a host country has made it clear that a more efficient and optimised operational structure is required.

FIFA Secretary General Fatma Samoura, who will form part of the nine-member management board of the new LLC, advised “created in accordance with the FIFA president’s vision and together with our Qatari counterparts, the joint venture aims to reorganise the way we work at the operational front and avoid inefficiencies.

"I am convinced that this new approach to planning, delivery and legacy, always hand in hand with our colleagues based in Qatar, will help to ensure that the World Cup continues to be the most eagerly awaited event by billions of fans worldwide.”

Smith will also serve as Managing Director of the new LLC, with Al Khater to take up the role of Chief Executive.

The announcement came on the same day that Amnesty International warned Qatar that it is “running out of time” to implement labour reforms affecting the 30,000 migrants working on the World Cup delivery.

The country has been accused of widespread and serious labour abuses since it began preparations for the tournament.