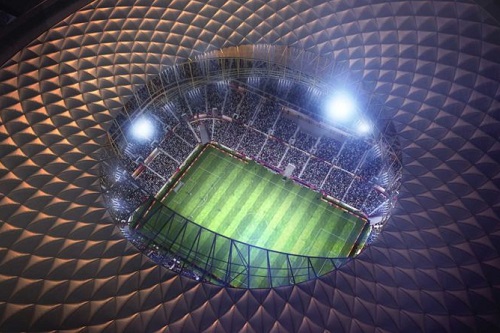 The organisers of the 2022 FIFA World Cup in Qatar have unveiled the design for the Lusail Stadium - the final stadium to be confirmed for the tournament.

The 80,000-seat stadium is the largest and last of the seven new venues to be built for the World Cup and will serve as the centerpiece for the tournament, hosting the opening ceremony, group games and the final.

As with all the new stadia being built, its design, provided by Foster + Partners, takes inspiration from the region and the country’s culture, with a golden bowl shape that is said to resemble bowls and vessels used in the Middle East for centuries. Openings in its facade will integrate light to mimic traditional ‘fanar’ lanterns.

The Lusail Stadium is an open-air venue, however it will feature a roof that covers all seating to provide shade while its oculus allows light onto the playing surface. The arena’s roof and curved sides is said to “create a cauldron where fans’ songs and cheers will reverberate to every ear”.

As well as a stadium, the Lusail project will construct an entire state-of-the-art city where 20,000 people will live and include its own train station and community spaces and parkland. 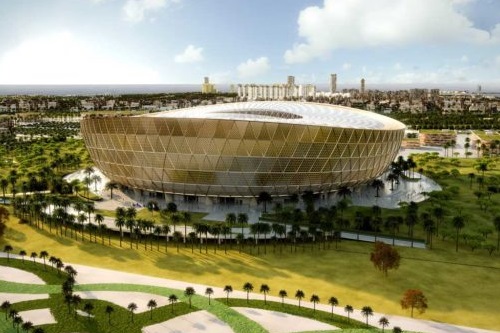 Construction of the stadium, which is being delivered by a joint venture comprising Qatari firm HBK Contracting Company and China Railway Construction Corporation, is already well underway. With the substructure complete, concrete superstructure and infrastructure works are progressing in all zones, while internal works have commenced in the west stand. Construction is set to be completed in 2020.

As part of Qatar’s promise for a more sustainable World Cup and to ensure venues don’t become oversized and underused relics, the Lusail Stadium will remove and donate a portion of its seating to other sporting projects so that it can be transformed into a community space including schools, shops, cafés, sports facilities and health clinics.

Announcing the design, Hassan Al Thawadi, Secretary General of the Supreme Committee for Legacy and Delivery stated “the new stadium is a nod to our past and a symbol of an exciting future. On the very same land as the home of our nation’s founder, it sits at the heart of a brand new city.

“It’s a city for the future, and once the World Cup is over it will form a crucial part of the legacy of the tournament as it transforms to become the heart of a brand-new community. We hope that one day, future generations look at Lusail Stadium as a source of inspiration, perseverance and innovation that enabled the transformation of Lusail into the modern city it is.”

Lusail Stadium images courtesy of the Supreme Committee for Legacy and Delivery.