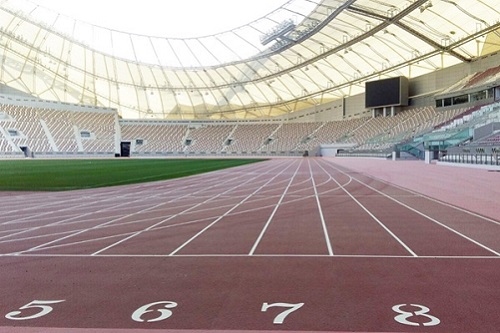 With just under a year to go until the IAAF World Athletics Championships Doha 2019, hosts Qatar have unveiled the completed Khalifa International Stadium.

To mark the one-year countdown, the doors were opened to the upgraded Khalifa International Stadium in Aspire Zone for special guests and media.

All attendees enjoyed a first-hand experience of the unique pink track and weather conditions an innovative cooling system will offer athletes and fans.

Track temperatures was set in the range of 24 to 26 celsius courtesy of the revolutionary in-stadium air-conditioning technology, which will guarantee optimal conditions for athletes and fans alike while also being sustainable.

Welcoming the reopening of the venue, IAAF President Sebastian Coe stated “Qatar has been hosting official IAAF events for over 21 years and in the organising committee we have a trusted partner who is committed to delivering a World Athletics Championships which makes a real difference to the world of athletics.

“With a year to go it is important the foundations are in place, so the final year can be spent testing facilities, systems and services. This is where we are now and there is a clear plan for testing.

“The fact that this is our first championship in the Middle East is hugely exciting. It means we can and should do things differently and provides an opportunity to reconsider what is possible in terms of new formats to appeal to spectators in the stadium or viewers around the world.

“We are encouraged by what we have seen over this last week and look forward to working with athletes, member federations and partners to deliver an outstanding World Athletics Championships (next) year.”