Waratahs to play three games at Western Sydney Stadium in 2019 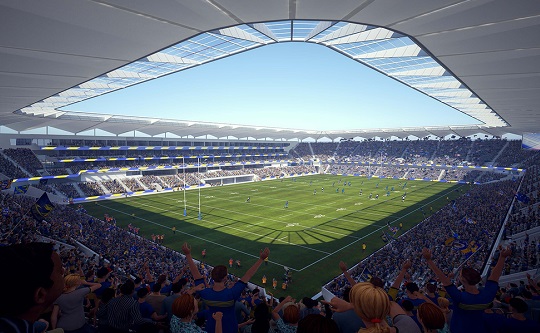 With their Allianz Stadium home being demolished at the end of the year, the Waratahs will face off against South African team the Sharks, Argentinian outfit the Jaguares and rival ACT franchise the Brumbies at the new 30,000 venue in 2019.

NSW Rugby Chief Executive Andrew Hore views the stadium as an opportunity to showcase the sport to both the local area and the international market, commenting “Western Sydney is one of the fastest growing regions in NSW with a diverse population that has a strong passion for rugby.

“We want to capitalise on this and by taking the NSW Waratahs to that region it will hopefully further encourage more youngsters to take up the sport.

“This also aligns with our broader Western Sydney strategy that has looked specifically at the needs of the area to grow the game and encourage participation and fan engagement.

“The fact that we will be one of the first sports to play at the newly developed, state-of-the-art Western Sydney Stadium is a real opportunity for our fans and rugby participants in Western Sydney. We want to continue to grow and develop the sport in that area and the fact that the NSW Waratahs will play three matches there next year will certainly help us towards that goal.”

Venues for the Waratahs’ other 2019 Super Rugby home games are yet to be announced, although the Sydney Morning Herald has reported that three matches will played at the Sydney Cricket Ground and the remaining two fixtures will be at suburban Sydney ground and a regional stadium.

NSW Minister for Sport Stuart Ayres welcomed the news that the fixtures would be played at the new venue, adding “no longer taken for granted, no longer second best, Western Sydney is now leading the way when it comes to sporting infrastructure and we welcome the NSW Waratahs to this fantastic new facility.

“By showcasing our talented NSW Waratahs in Western Sydney, we will show our younger players the pathway to the top, right in their backyard.”

Earlier this week it was reported that the Parramatta Eels having earlier this week rejected a deal to play at the venue, claiming commercial terms from the venue’s managers were “unacceptable”.

In 2015, the Waratahs announced that they would be playing at Allianz Stadium "for the next 15 years".