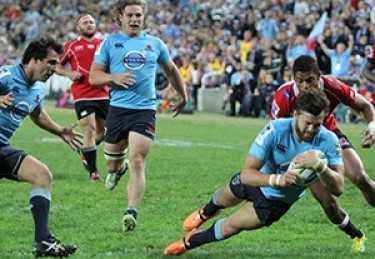 A new partnership between the NSW Rugby Union and the Sydney Cricket and Sports Ground Trust, will see the NSW Waratahs will play all of their home Super Rugby games at Allianz Stadium from 2016 onwards.

The new partnership, which runs until 2031, will also see all Super Rugby quarter finals and semi-finals continue to be held at Allianz Stadium and the NSW Waratahs and the NSW Rugby Union (NSWRU) continue to be based at Moore Park.

According to a report earlier this week in the Sydney Morning Herald, the SCG Trust intervened to stop a deal that would have seen Super Rugby's reigning champions move their games to the ANZ Stadium.

With the new Super Rugby season launched this week, the new agreement is reportedly a simple stadium hire arrangement without the management component proposed in the ANZ Stadium deal.

The deal is understood to include a rise in revenue for the Waratahs via at least two extra games each season moving from ANZ Stadium to Allianz Stadium, as well as some concessions on overheads including office rental. It also sees the Waratahs retain their base at Allianz Stadium, becoming closely involved in the redevelopment plans for the venue and the sporting precinct as a whole.

The new hire agreement will also allow the Waratahs the ability to play any future Super Rugby final at the 82,500-capacity ANZ Stadium where a record Super Rugby crowd of 61,823 watched the Waratahs beat the Crusaders last year, roughly 18,000 more than Allianz Stadium's current capacity.

The Waratahs home semi-final against the Brumbies at the ANZ Stadium attracted a crowd of 38,000.

Commenting on the agreement, NSWRU Chairman Nick Farr-Jones stated “this is a landmark partnership for the NSWRU, Waratahs Rugby, the Sydney Cricket and Sport Ground Trust, and a positive outcome for everyone who follows rugby union in NSW.

“The commercial arrangements will ensure the future of our sport at a grassroots level is sound and will enable rugby to further deepen its well-established links throughout NSW.

“NSW Rugby and the NSW Waratahs have a long history of playing at Moore Park, Allianz Stadium is undoubtedly our spiritual home.

“The future of this precinct is extremely exciting, and we are looking forward to being part of it for many years to come.”

Welcoming the Waratahs ongoing presence at the Allianz Stadium, Sydney Cricket and Sports Ground Trust Chairman Tony Shepherd added “rugby union has been played on Trust lands since its earliest days as a recognised sport in this country.

“From the SCG, to the Sydney Sports Ground and now to Allianz Stadium it remains a hugely important and popular part of our history.”

The agreement follows last year’s announcement that the Sydney Swans would play all their matches and AFL Finals series fixtures at the Sydney Cricket Ground for the next 30 years.

Waratahs crowds at Allianz Stadium increased more than 20% during season 2014.

The Australian Rugby Union is also planning to move its headquarters from St Leonards on Sydney’s lower North Shore to a shared space at the Waratahs' current Moore Park home.

Image courtesy of the SCG Trust.