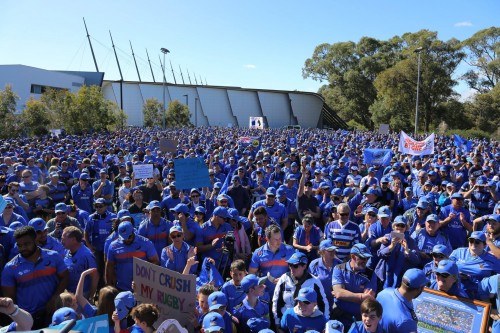 RugbyWA has lost its appeal in the NSW Supreme Court against the axing of the Western Force from the Super Rugby competition.

NSW Supreme Court Judge David Hammerschlag ruled that the Australian Rugby Union (ARU), as the owner of the Force, could do what it liked with the franchise, in the Judge's words "even destroy it".

With the ARU having announced its intention to cut the Force from the competition last month, RugbyWA challenged that decision in the NSW Supreme Court, arguing the ARU had broken a commercial contract giving the Force a place in Super Rugby until December 2020.

Judge Hammerschlag found in favour of the ARU's argument that a renegotiation of a broadcast agreement gave it the right to reduce the number of teams in the competition from 18 to 15.

In delivering his judgment the Judge advised "it is to be remembered that ARU owns the Force."

However, this may not be the end of the matter with Rugby WA and the Force to now decide whether to continue their fight by challenging the decision in the High Court of Australia.

RugbyWA quickly released a statement saying it would evaluate its legal options and consider grounds to seek leave to appeal to the NSW Court of Appeal in the coming days.

RugbyWA said it expected the ARU would now confirm termination of the Western Force’s participation in the Super Rugby competition, commenting "as we understand, the ARU had formed the view in February this year that the Western Force were the only team that could legally be removed from the competition, for the ARU to suggest there was an objective and transparent process, evaluating the merits of both the Western Force and Melbourne Rebels, was misleading and disrespectful to both RugbyWA and the Victorian Rugby Union."

Mining billionaire Andrew Forrest, who has emerged as a backer of the Western Force, also issued a statement advising that the "court decision breaks Force’s hearts but toughens and emboldens our spirit."

Forrest's statement advised "while I am hugely disappointed, on behalf of the players, coaches, staff, RugbyWA board and the entire WA rugby community, it is the Australian Rugby Union that needs to explain why it culled the Western Force, on grounds that had nothing to do with financial or playing performance."

Forrest stressed that he was not ending his backing of the franchise, adding "I have retained one of Australia’s leading silks, Allan Myers AC, QC (who) will review today’s decision (and) I will not keep the Australian public waiting.

"We will announce, in the next few days, whether we will seek leave to appeal to the High Court."

Indicating that he might back a new rival competition, Forrest continued "this is the beginning of the new Western Force and the new Indo Pacific rugby competition based on a fast moving game, highly spectator and player friendly, in full formal competition, as well as a new seven a side competition."

He concluded "discussions with international commercial partners, member unions, elite players and the WA Government have commenced, and, as soon as we can, we will let the fans know all the exciting details."

Image: Western Force fans at a recent protest in Perth.