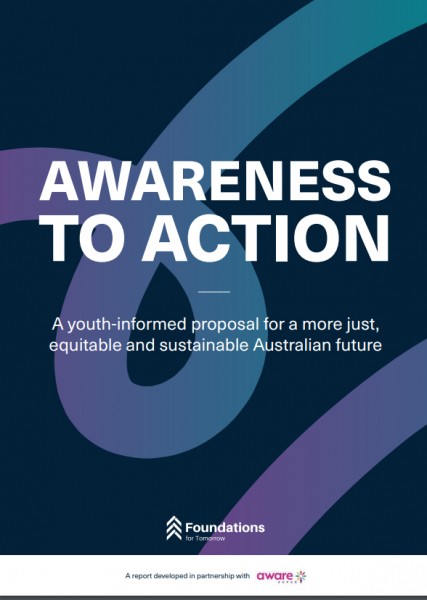 A survey released today – ‘Awareness to Action’- of 10,000 young Australians shows that 93% say the government needs to be doing more about climate change with only 7 % per cent feeling confident about their future.

The report, released today by Foundations For Tomorrow - an initiative of the World Economic Forum’s Global Shapers Community and supported by Aware Super - seeks to amplify the voices of Australia’s next generation.

This research captures more than 10,000 responses from young Australians: 5,743 under the age of 30 who completed a comprehensive survey; the sentiments from which were echoed by 5,222 responses to targeted social media polling. This report also includes perspectives of 22 prominent leaders from across Australia’s government, business and community sectors.

The report identifies young people’s top priorities for urgent policy action, which are:

The young Australians surveyed say they lack confidence in leaders across the parliaments and boardrooms of Australia, with only 7% feeling confident about the future, and the majority of respondents calling on government to take more ambitious action. Young Australians believe leaders are detached from the things affecting them the most, with only 11% believing that their vote is a meaningful way to create change.

Managing Director of Foundations For Tomorrow, Taylor Hawkins notes “Young people’s disillusionment with Australia’s political system is not a sign of apathy. This report shows young Australians are deeply engaged in the country’s most pressing policy issues. They are looking for ways to create change, and want leaders to listen and take initiative.”

Action
Young Australians nominated climate change as the most important challenge for Australia to address. 80% of those surveyed want the government to make accelerating action on climate change a key goal of the economic recovery from COVID-19. Some 71% say they would vote for or support political leaders who take bold and immediate action to address the climate crisis.

When asked ‘what is the most important social issue to you’, 38% gave responses focused on diversity and inclusion. At a high level, they are fairly split on whether they view Australia to be an inclusive society, with 66% believing the country is not. Young Australians also demonstrated a strong desire for First Nations’ rights and reconciliation to be prioritised in Australia’s future. An overwhelming 96% would vote ‘yes’ in a referendum to recognise First Nations Australians in our constitution, and 90% say First Nations Australians should have an enshrined voice in Parliament.

Personal wellbeing and housing security came in as the second and third most important challenges. Some 78% of young Australians do not believe that all Australians have access to the basic support they need. The report found that young people are struggling due to mental health challenges and lack of affordable rental properties, combined with the significant financial constraints of balancing study and employment.

Hawkins added “It is time for Australian leaders to turn our awareness of key policy challenges into meaningful action. The very fact that many people won't be surprised by the statistics in this report is the greatest indictment on the lack of leadership and sustained progress on the issues that matter most to young Australians. We need to reset our leadership culture, because, at this rate, we will continue to lag on the most important issues facing this country.”

In response to these findings, Greens Senator Sarah Hanson-Young – one of the report’s responding leaders – says, “I think there is a breakdown of trust in politicians and in government. And that's a travesty. We need a democracy that is accountable, that is robust, that is engaged because of the issues we need to solve in this next generation.”

Principles for Future Leadership
The report outlines six principles for future leadership that, based on the qualitative submissions of over 3,000 young Australians, articulate the leadership culture that is required to create a more just, equitable and sustainable future for Australia.

Aware Super is a proud supporter of Foundations For Tomorrow and the Awareness to Action initiative. Deanne Stewart, Aware Super Chief Executive, and responding leader said “The insights from this report help us to better understand how younger Australians view their future. And what’s really clear in their feedback is this palpable sense of wanting to see leadership and clear action around some of these massive issues such as climate change, financial security and housing affordability, and Australia’s response to these very real threats and issues.

“They want confidence in their leaders that they can walk and chew gum, tackling the pandemic as well as the longer-term risks associated with climate change into the future. As the first fund in Australia to divest from thermal coal, we’ve now invested over $1 billion in renewable energy and low-carbon technologies and projects to date, and we are looking to others to take meaningful and decisive action as well.

“We need to address this growing divide by embracing multigenerational thinking, restoring trust, and taking more risks. Young Australians know that their future is on the line, but they are still hopeful that their government and business leaders will find new ways to solve our pressing challenges. If we want Australia to live up to its potential as a just, equitable and sustainable country, the time for that action is now.”

This report includes perspectives of 22 prominent leaders from across Australia’s government, business and community sectors. Insights into these discussions can be accessed here.