Singapore iFLY up and running 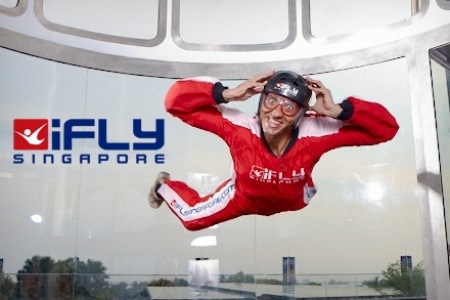 The S$25 million attraction on Sentosa Island was supposed to open last year, but faced delays.

At a height of 17.22 metres and a diameter of 5 metres, the indoor skydiving wind tunnel is said to be the largest of its kind in the world.

Within, visitors can experience the thrill of indoor skydiving at a cost of S$89 per adult.

This entitles visitors to two 45-second sessions of suspension in thin air.

Instructors are at hand to ensure the safety of all participants.

At the recent launch, iFLY Founder and Managing Director Lawrence Koh, told reporters that the $25-million US franchise, which began construction in 2008, was "a dream...finally come true.

Koh himself is an avid skydiver.

Also at the launch was Singapore Foreign Minister George Yeo, who delivered a short address about aerodynamics. For the event, the outgoing Minister put on a red, personalised skydiving suit and took a two-minute 'flight' in the wind tunnel.

The iFLY is open to first-time flyers, from as young as seven years old, as well as professional skydivers. Its team of 11 instructors include three who spent two years training in the United States and Great Britain.

27th May 2009 - HIGH FLYING ATTRACTION FOR THE GOLD COAST