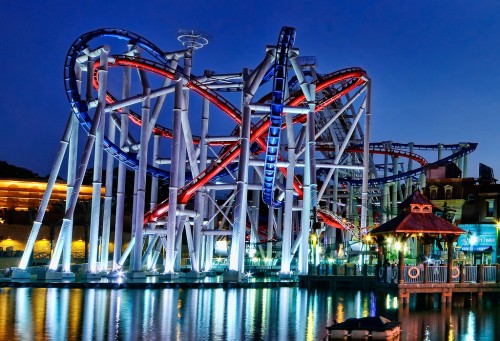 Channel NewsAsia has reported that authorities have given Universal Studios Singapore the required license to reopen the ride.

In a statement, Universal Studios said officials had worked closely with Singapore authorities and theme park safety experts to determine the cause of the failure and to correct the fault.

The world's tallest duelling roller coaster went through months of re-engineering and thousands of test cycles.

It was shut down in March last year, just weeks after a grand opening of the theme park, after a failure had been detected on one of the seats during routine checks.

The fault was attributed to fatigue cracks detected in a welded component of the seat's support structure, the part which attaches the coaster's seat to its frame.

All welded components for the seats have since been replaced with a new machined part.

Prior to re-opening, Universal Studios Singapore will host a series of special events, including dedicated ride access times for team members of Resorts World Sentosa, invited guests from the ride's sponsor Panasonic and annual pass holders.

During this period, park guests may also be invited to ride on the coaster as operational procedures are refined.

Resorts World Sentosa's Vice President of Park Operations John Hallenbeck explained "Battlestar Galactica is a signature and prominent ride at Universal Studios Singapore and we are so excited about it taking to the skies again. We expect sellout crowds and are advising guests who have been waiting for Battlestar Galactica to book their February tickets in advance."

Battlestar Galactica, themed after the hit TV show about an on-going battle between Cylons and Humans, is comprised of both the suspended 'Cylon' coaster and the seated 'Human' coaster that chase each other on twisting integrated tracks. Riders on both coasters experience unbelievable thrills as they zoom, loop, turn and narrowly avoid collision.

Each Battlestar Galactica track is a kilometre-long and the ride takes approximately 90 seconds to complete.

For more information go to  www.rwsentosa.com/Attractions/UniversalStudiosSingapore