US Gaming Company bets large on Singapore and Asia 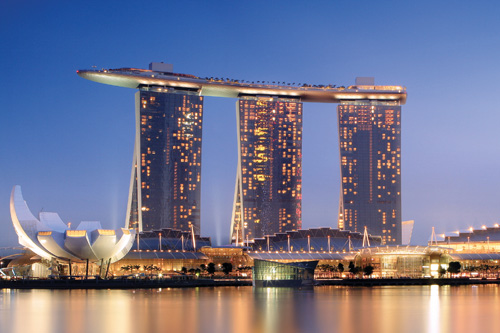 The recent opening of Singapore's Marina Bay Sands marks the latest market entry in the fight for Asia's gambling dollar.

The US$5.5 billion resort, the world's second most expensive casino after MGM Mirage's CityCenter in Las Vegas, is backed by Las Vegas Sands, the world's most valuable gaming company. Marina Bay Sands is expected to generate as much US$1 billion in annual profit and, by next year, surpass its US counterparts in generating revenue for Las Vegas Sands.

Singapore legalised casino gaming in 2005 but not all Singaporeans were happy with the decision, fearing the casinos would attract crime and lead to problem gambling among its citizens.

The city state's gaming rival, the former Portuguese enclave of Macau, crammed with over 30 casinos and the only place in China where casino gambling is legal, has already eclipsed gambling revenues seen in casino capital Las Vegas.

Asia's emergence as global casino centre comes as gaming revenues in Las Vegas, Atlantic City and other US centres decline or show little growth, hit by the poor economic climate.

US gaming tycoon Steve Wynn recently indicated that, after the opening of the US$600 million Encore in Macau, he might shift Wynn Resorts' headquarters from Las Vegas to Macau. Wynn Macau is planning its first mega casino resort in Macau's Cotai strip.

Singapore, with its two mega casinos, is unlikely to overtake Macau but may steal some âhigh-rollersâ from China as operators shift premium business to the city-state where they face an effective tax rate of 12% compared with about 39% in the Chinese territory.

Genting Singapore opened the other casino in the city state's Sentosa Island in February this year.

"There is going to be a negative impact", said Neo Teng Hwee, head of portfolio management at Bank Julius Baer in Singapore, adding "Malaysians residing in the southern parts and the more well-heeled will be attracted to the better infrastructure in Singapore."

As Sean Monaghan, Managing Director of AG Leisure Partners and a former casino analyst at Merrill Lynch states "when you walk through Marina Bay Sands, you'll notice a significant quality difference from the finishing right down to the air quality.

"Everyone prefers better quality over less quality. There will be a shift of people and it will be noticeable."

Marina Bay Sands, when completed, will have 2,600 hotel rooms, convention facilities for up to 45,000 delegates, restaurants run by celebrity chefs and an eye-catching cantilevered, 200-metre-high floating garden perched on top of three hotel towers.