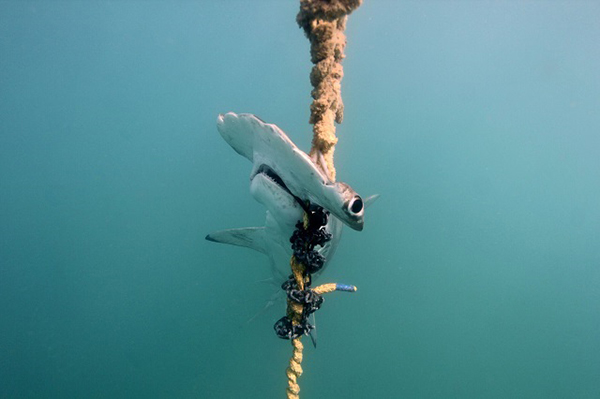 This re-installation comes at a cost of $5 million, after they were removed by the Queensland Government in September.

The re-installation was made possible by the Federal Government changing the State Government's permit to allow fisheries staff and contractors to exercise discretion over whether a shark could be released.

The ABC reports that under the deal, the Commonwealth will also pay $4 million towards "SMART" drum line trials, a drone surveillance trial in the Whitsundays, rebates to councils for installing safety netting, and further swimmer education.

Member for Barron River Craig Crawford said drumlines were being re-installed at five local beaches after negotiations with the Federal Government and workplace health and safety discussions with shark contractors.

Crawford noted “this decision is a huge win for local swimmers, tourists, our tourism industry and the wellbeing of the workers who inspect the drumlines.”

25 drumlines will be returned to the water in northern Cairns including: Ellis Beach, Buchan Point, Palm Cove, Clifton and Trinity Beach.

Crawford added “Like many Far North Queenslanders, I was stunned by the implications of the Administrative Appeals Tribunal (AAT) and Federal Court decision.

“The return of the 25 drumlines off the northern beaches and within the Great Barrier Reef Marine Park is a victory for common-sense and safety.”

Queensland Fisheries Minister Mark Furner said restoring the program was made possible after the GBRMPA issued an amended permit that took into account workplace health and safety issues.

Minister Furner added “our preference has always been to continue the proven Shark Control Program in the Reef, but this is a federal park with federal laws and Queensland must comply with the permit.

“We wanted to put our drumlines back in and that is exactly what we are doing, with extra training and new procedures ensuring our contractors can safely comply with the new requirements.

“Contractors will check drumlines regularly and tag, relocate and release tiger, bull and white sharks alive where possible and if it is safe for them to do so.

“Other shark species will be released at the site of their capture.

“If it is unsafe for the contractor, or if there are any animal welfare concerns, sharks will be euthanised.”

The ABC reports that the decision to remove the drum lines in the first place came after the Humane Society successfully challenged the Queensland Government's practice of culling sharks.

The group's marine biologist Lawrence Chlebeck said he welcomed the Government's new arrangements advising "we are happy that the Queensland shark control program in the barrier reef is moving to a non-lethal program.

"We're going to keep close tabs on it … we expect Queensland fisheries to release statistics on how many sharks are caught, and what their condition was upon release.

"If any euthanising does occur, we hope to be able to have access to that information as well, so we can closely monitor it."

Prior to the federal court decision, 19 species of shark could be legally shot and killed upon being caught on drum lines.

Minister Furner said relocating and releasing sharks would reduce the immediate risk to swimmers at that location but would not remove the risk entirely adding “that’s why we continue to encourage everyone to be SharkSmart and stay aware of what is happening around you every time you are in the water,” he said.

“Our approach will help ensure swimmer safety in the short term while moving in the longer term to non-lethal approaches, based on the best available science and trials.”