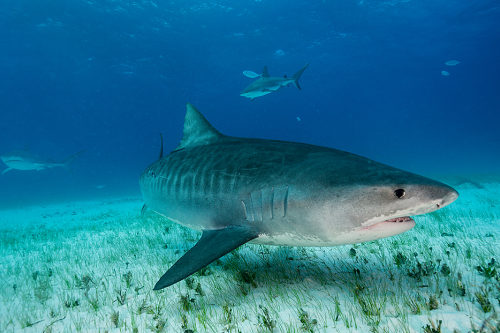 With four tiger sharks now having been killed in the Whitsundays in the aftermath of two attacks on tourists last week, a Queensland-based conservationist has advised that the area of sea off Whitsunday Island is known by locals as a ‘no-go zone’ for swimming.

Jonathan Clarke, from Sea Shepherd Australia, has spent months inspecting shark drum lines in Queensland. He said the drum lines were often left for days without bait, creating “a false sense of safety” for swimmers.

Four tiger sharks were killed at the weekend by baited hooks dropped into Sawmill Bay by Fisheries Queensland following the attacks on Justine Barwick, aged 46, and Hannah Papps, aged 12.

Advising that fishemen often caught sharks at the site of the attacks, Clarke told AAP “I do know locals who know it very well, and very much the feeling is this is a known area ... as a safe mooring place but it is murky water and it’s not necessarily a safe swimming place.

“(Drum lines are) certainly not going to make it better. So far they’ve caught four sharks, they’re medium-sized tiger sharks. There’s a lot of very large sharks in that area that seem to frequent that area a lot.

“One of the best mitigation methods is good public information. Were locals and visitors adequately warned following the first bite incident?”

The Queensland Government insists drum lines have been effective and their use is supported by Labor and the Liberal National party.

However, Clarke said there was no evidence that was the case. He said his investigation of drum lines showed they were often not even operational.

He added “up in the north, in Cairns, Townsville and Mackay, they’re using mullet on the lines. Within the day, they’re laid out, a lot of the bait is taken. When we monitor it over days and days ... one day we found three of 54 drum lines at Townsville were baited. One day in Mackay, 100% of those drum lines did not have any bait.

“It’s not even a false sense of safety, it’s actually a placebo.”

Clarke said he would not advocate for more regular baiting of the drum lines. Over decades of shark control in Queensland, he said baiting had in some cases created known shark feeding areas.

Both victims were bitten while in shallow water in Cid harbour.

Both victims are in hospital in Brisbane and Hannah is in a critical but stable condition, with Barwick having undergone a marathon 18-hour surgery to save her leg.

11th May 2017 - Whitehaven Beach reopens after restoration and clean-up