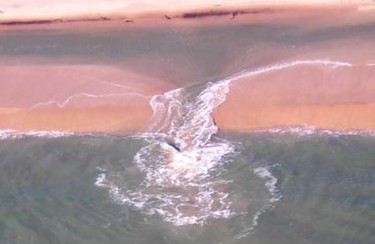 In a study released this week, Dr Rob Brander of the University of New South Wales analysed fatality figures from rips compared with 'natural hazards' including bushfires, cyclones, floods and shark attacks.

The study found that based on reported deaths between 2004 and 2011, on average, 21 people drown in rips around Australia each year. This compares with 7.5 for cyclones, 5.9 for bushfires, and one for sharks when deaths are averaged over the longest available databases for each, some going back as far as 1852.

Dr Brander, often known as 'Dr Rip' and acknowledged as Australia's top rip expert, told Fairfax media that the number of confirmed rip deaths was probably an underestimate of the reality, because they were only confirmed when a witness described how the victim drowned.

Dr Brander explained "unlike a disaster where there is a mass loss of life from one incident, rip currents do not have that shock value.

"Someone will drown, and then someone else will drown a few days later in a different location. It is not widely reported and people become complacent about the severity of the hazard.

"Studies show Australians do not understand rips and cannot identify rips as well as they think they can."

The victims of rip drownings are mostly male, with 84.5% of incidents compared to 15.5% for females. This is similar for rip related rescues, of which 48.8% involved males, 26% females, and 25.3% where gender wasn't recorded.

Another pilot study surveyed 671 rip survivors to better understand the demographics and behaviour of swimmers caught in rips. The survey ran on beach and surf related websites, with a small amount of surveys conducted in person at a beach, so the population surveyed is biased towards people already seeking out beach and surf information online.

The results contradicted the belief that it is mostly overseas tourists getting caught in rips the majority (77%) were Australian. Of the 23% that were born overseas, the largest proportion were from the UK (45.5% of non-Australian respondents), followed by Americans (12.8%) and Europeans (12.8%).

Most escaped the rip current without any assistance, either by swimming sideways against the current or floating out with the rip and then swimming in.

Three quarters of those surveyed were successfully able to identify a rip from photos shown in the questionnaire.

Dr Brander and his co-authors excluded heatwaves because of the "the complexity of the issue and interrelated factors affecting heat-related mortality" despite acknowledging the number of fatalities is "likely greater than those caused by rip currents".

According to the Australian Emergency Management Institute, heatwaves have resulted in 2,887 deaths from 1890 to 2013. This would average out to 23.5 deaths per year, slightly more than rips.

A rip is a strong current caused by water from waves breaking on the beach flowing back out to sea through deeper channels in the sand. The current can easily pull swimmers away from the shore.

Dr Brander wants more funding for school programs to teach children how to identify rips from a young age. He also supports more lifeguards at beaches now unpatrolled, but understands the logistical challenge and expense.