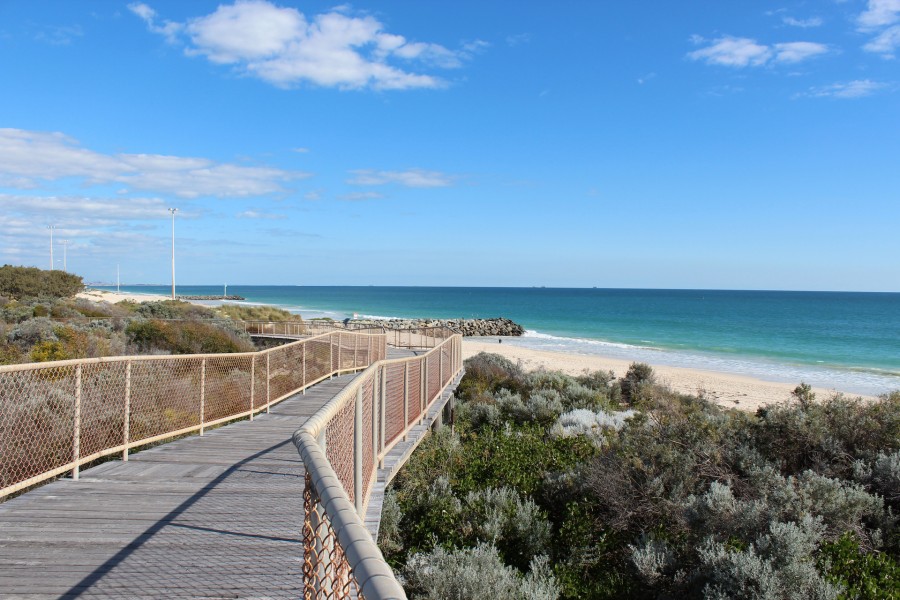 The $300,000 anti-shark barrier at Quinns Rocks is the fifth barrier funded by the Western Australia Government to be rolled out across Perth and the South West as part of efforts to safeguard swimmers from sharks.

The enclosure is 300 metres in length along the beach and about 85 metres out from the shore. It will be in place all-year-round for a minimum of five years.

The company building the installation has placed more than concrete weights and anchors that will fix the enclosure to the sea floor. In what is believed to be a first in Australia, Global Marine Enclosures used a helicopter to install the blocks.

The Western Australia Government contributed two-thirds of the cost with City of Wanneroo funding the balance along with operating expenses of $20,000 a year.

Other enclosure have been built at Old Dunsborough, Busselton foreshore, Middleton Beach in Albany and Sorrento Beach while the City of Cockburn funded an enclosure at Coogee, south of Fremantle, as part of a three-year trial that ends in November.

The growing number of enclosures are part of a range of efforts by the Western Australian Government to ease the fears of ocean users after a number of shark attacks.

"The investment also includes $88,000 to enable Surf Life Saving WA to conduct a three-month trial of drone surveillance at a number of beaches and up to $500,000 to trial the Clever Buoy sonar shark detection system at City Beach.

"However, no single measure alone will protect water users from shark interactions but a complementary suite of measures will reduce the risk."

Premier Barnett added that access to the ocean represented a core part of the way of life of Western Australians adding “the ability to swim and train within a protected area will make a significant difference to people's peace of mind and enjoyment when undertaking ocean-based activities.

There have been 23 shark-related fatalities in the last 100 years in Western Australia, 14 of which have occurred since 2000.