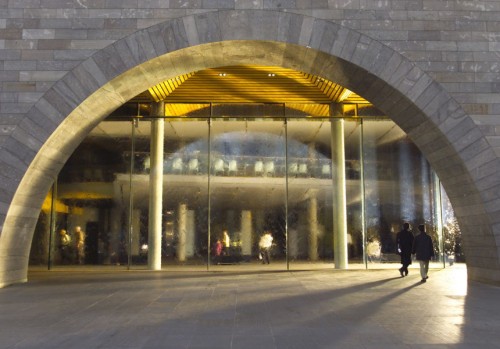 The National Gallery of Victoria (NGV) has come under scrutiny after allegations that its sub-contracted security guards have been underpaid.

An investigation by the ABC found that security guards at the Gallery were were illegally paid cash in hand, while others worked on weekends for a flat hourly rate below the award wage.

One guard told the ABC that he, and many other work colleagues, were paid in cash with a flat hourly rate on weekends, which was below the award with no tax or entitlements given.

He said when he had questioned the cash payment,​ his manager at the security company which employs him told him, ‘If you don’t want to do it, you have to leave.’

Another guard, Belinda Panaou told the ABC she was dismissed from her employment with a security contractor after raising concerns directly with NGV staff that she was being paid below the award flat rate.

Both guards were hired by the gallery’s security contractor Building Risks International Pty Limited (BRI Security), and then transferred to the sub-contractors, Java Security, and in the case of Panaou, National Security Group (NSG) Australia.

She added that the guards who were being paid in cash were favoured with more shifts.

In response to the allegations, the Victorian Department of Treasury and Finance has appointed auditing firm KPMG to investigate, and may refer the allegations to the Fair Work Ombudsman.

"We received the investigator's final report this week … further action will be taken as appropriate, which includes referring the allegations to the Fair Work Ombudsman."

The National Gallery of Victoria declined to be interviewed but said in a statement BRI Security "was engaged through a Victorian Government State Purchase Contract with a vetted Department of Treasury and Finance (DTF) approved supplier".

BRI Security holds contracts to guard many well known institutions including the Art Gallery of Western Australia, Australian Council of the Arts, Public Record Office of Victoria, La Trobe University and the University of Western Sydney.

Victorian secretary Jess Walsh told the ABC “clearly there needs to be much stronger standards in the way the State Government awards its contracts.”