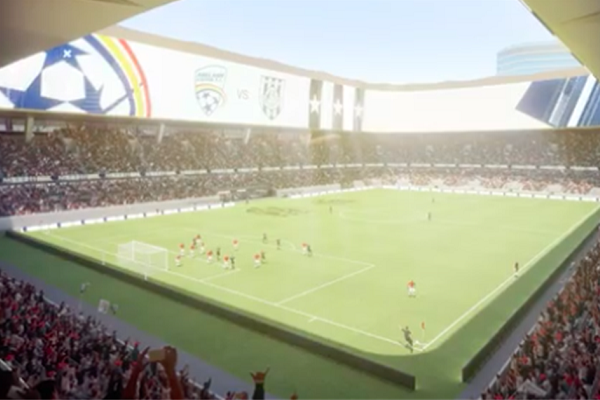 The concept for a new multi-use sports and entertainment venue in the centre of Adelaide has been unveiled by Adelaide Venue Management.

The plans feature a 22,000 capacity football stadium able to be turned into a 30,000 entertainment venue via an elevated-pitch design. The venue would also be able house up to 15,000 fans in ‘court sports mode’ for basketball and netball games.

Having seen how the redevelopment of the Adelaide Oval has stimulated the city’s CBD, the proposed complex would include commercial space, food and beverage outlets, hotels and medical consulting suites.

It is argued that the Adelaide Entertainment Centre, which seats up to 11,300 guests, is of “insufficient capacity” to attract major events to the city, while the video also claims that Coopers Stadium, home of A-League football club Adelaide United, is nearing the end of its lifespan.

According to the video, the state of South Australia requires a FIFA and rugby-compliant rectangular venue. Coopers Stadium, which has a capacity of 16,500, will be one of the host venues during Australia’s staging of the FIFA Women’s World Cup in 2023.

The video also says that the 8,000-seat Adelaide Arena, which is used for basketball and netball games is at the end of its “useful life”. A similar assessment is given for the 3,200-seat Priceline Stadium, which is primarily used for netball.

Additionally, it is argued that a larger tennis venue than the current Memorial Drive Park is needed, although the video states that a new roof structure at the facility provides a “short to mid-term fix”. While the video accepts that the Adelaide Convention Centre is a “world-class facility”, it lacks exhibition space to host “major exhibitions of strategic importance to South Australia’s economy”.