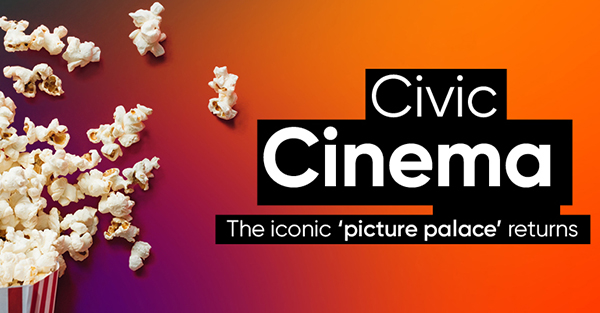 Cinema is set to return to the Newcastle CBD with the Civic Theatre installing a 7.5-metre-wide movie screen in its main auditorium and showing recent releases for the enjoyment of the community.

Under two years since the closure of the Tower Cinemas on King Street, the return of films will re-activate the CBD, which has experienced major disruption due to COVID-19.

The Civic Cinema initiative is part of the Civic’s Beyond the Stage program of cultural offerings outside of the traditional uses of the Civic Theatre and City Hall. So far, this has included the Civic Bar Beats – Friday evenings of live local music in our Theatre Bar, and lunchtime concerts at City Hall.

Newcastle Lord Mayor Nuatali Nelmes said cinema and theatre have a long history in Newcastle’s CBD and City of Newcastle is pleased to offer both live performance and recent release cinema for the enjoyment of the community.

Lord Mayor Nelmes advised “after a period where COVID-19 has had such a devastating impact, it’s wonderful that through adding regular film screenings to our Civic Theatre program, we can take this positive step in our city’s journey towards recovery, and provide a boost to surrounding local businesses by attracting more people into the Civic precinct.”

The Civic Theatre opened in 1929, and although designed as a live theatre, it was leased as a cinema for the next 45 years.

Civic Theatre Manager Leonie Wallace said locals are thrilled to experience something contemporary but screened in a venue with such historical links adding “we trialled bringing film back to the Civic Theatre in January with a season screening of a selection of the most acclaimed productions from London's National Theatre at the Civic Playhouse. It was so popular that film screenings in the Civic Theatre was the next obvious step.

“Our new program features a variety of films that appeal to people of all ages and tastes, such as recent release features, documentaries, theatre productions and children’s films during the school holidays.

“We’re also working on securing shows to return to the Civic Theatre stage with the venue’s audience capacity lifted to 500 people from next month, the maximum number allowed under the current Public Health Order.

“We have made changes to how the Civic Theatre operates to enable people to experience cinema and live performance safely with physical distancing requirements and hygiene measures met under our COVID Safe plan.”