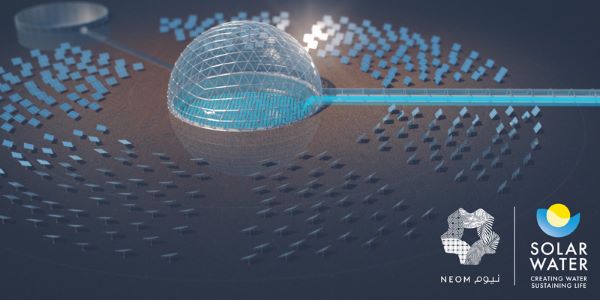 NEOM, the flagship project of Saudi Arabia’s post-oil diversification plan, has announced that it will adopt pioneering solar technology to produce low cost, environmentally friendly water to strengthen NEOM’s reputation as an emerging hub for innovation and conservation.

NEOM, the Saudi Arabian ‘giga-project’ is being built on a 26,500 km2 area in the North-Western corner of the Kingdom along the borders of Egypt and Jordan.

The aims of NEOM to become a major location for sporting events moved forward with the hosting of its first officially-endorsed international events in July last year including the IWWF NEOM Wakeboard event, a FIFA-endorsed Beach Soccer Cup tournament with teams from Saudi Arabia, China, Egypt, England, Oman and the UAE and exhibition Beach Rugby matches with players from Saudi Arabia and an all-female set of match officials, plus a Beach Tennis invitation event starring male and female players from the region.

NEOM is reporting that it has signed an agreement with U.K.-based Solar Water Plc. to build the first ever “solar dome” desalination plants with the pilot project aiming to revolutionise the water desalination process, helping solve one of the world’s most pressing problems – access to fresh water.

Work on the first “solar dome” is expected to be completed by the end of 2020.

NEOM states that at an estimated US$0.34/metre3, the cost of producing water via “solar dome” technology will be significantly lower than desalination plants using reverse osmosis methods. The technology will also significantly reduce the impact on the environment by producing more concentrated brine, a potentially harmful byproduct of the water extraction process.

Commenting on the project, Saudi Arabia’s Minister of Environment, Water and Agriculture, H.E. Abdulrahman Al-Fadli  advised “NEOM’s adoption of this pilot supports Saudi Arabia’s sustainability goals, as outlined in the country’s National Water Strategy 2030, and is fully aligned with the sustainable development goals set out by the United Nations.

NEOM Chief Executive, Nadhmi Al-Nasr added “easy access to abundant seawater and fully renewable energy resources means NEOM is perfectly placed to produce low cost, sustainable fresh water through solar desalination. This type of technology is a powerful reminder of our commitment to supporting innovation, championing environmental conservation and delivering exceptional livability. Working together with the Ministry of Environment, Water and Agriculture we can expand the implementation of this technology beyond NEOM.”

According to NEOM, Solar Water’s ground-breaking approach, developed at the U.K.’s Cranfield University, represents the first use, on a large scale, of Concentrating Solar Power (CSP) technology in seawater desalination. The process sees seawater pumped into a hydrological “solar dome” made from glass and steel, before it is superheated, evaporated and eventually precipitated as fresh water.

The “solar dome” desalination process, which can also operate at night due to the stored solar energy generated throughout the day, will reduce the total amount of brine that is created during the water extraction process. Typically, the high salt concentration in brine makes it more difficult and expensive to process. The solar dome process helps prevent any damage to marine life as no brine is discharged into the sea.

With over one billion people around the world lacking access to clean water every day, NEOM’s solar desalination project will serve as a test case for other water scarce countries that are struggling to generate environmentally safe and sustainable sources of fresh water.

Solar Water Chief Executive, David Reavley commented “currently, thousands of desalination plants around the world are heavily reliant on burning fossil fuels to extract water, poisoning our oceans in the process with excess brine. Our game changing desalination technology is 100% carbon neutral and entirely sustainable. In NEOM we have found a partner who has a strong vision of what a New Future looks like in harmony with nature.”

For more information on NEOM go to www.neom.com/en-us/

Editor's note: Conference organiser IQPC has advised that its second Attractions, Amusement & Entertainment Development Asia conference due to be held this week in Singapore has been postponed "due to the current situation with COVID-19 - Coronavirus outbreak."

The event will be held on Tuesday 2nd and Wednesday 3rd June.