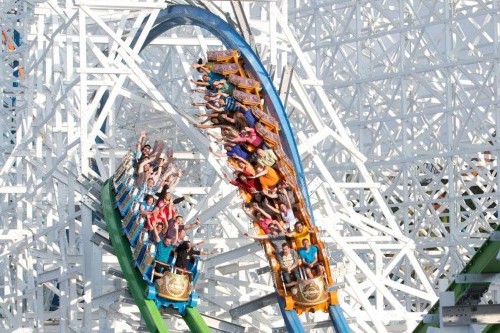 US-based theme park operator Six Flags has confirmed long-awaited plans for its first Saudi Arabian venture, announcing that it will open a theme park just outside of the capital of Riyadh by 2022.

To be developed by Saudi Arabia’s sovereign wealth fund to develop a theme park just outside of Riyadh, the theme park will form part of Qiddiya, a 334 kilometre² entertainment and leisure destination that will also feature a safari park as well as other sports, cultural and recreational facilities.

With Six Flags was focusing its expansion efforts outside of the USA, with the company also looking at potential locations in Dubai, Vietnam and China, the deal with Saudi Arabia’s Public Investment Fund (PIF) - a company set up to manage the country’s sovereign wealth and facilitate development of its national economy - was announced in February last year.

Worth US$2 trillion, PIF has announced plans to develop the Six Flags-branded park under a franchise agreement, with the operator working alongside PIF to design and construct the visitor attraction.

Announcing the development of the new attraction, which is expected to open by 2022, Six Flags International Development Company President, David McKillips stated “innovation is synonymous with the Six Flags brand, and our international licensing business provides a unique opportunity to continue our strong global growth.

"We see great potential in the Saudi Arabian market and look forward to collaborating with the PIF to create a world-class entertainment destination for young people living in Saudi Arabia."

Part of Saudi Arabia’s Vision 2030 plan – which like much of the Arabian Gulf is aiming to reduce reliance on oil – includes a relaxation of the rules on its entertainment sector in an area which traditionally has been ultra-conservative, with particularly harsh laws in relation to women.

By 2030, Saudi Arabia wants to have more than 450 clubs providing a variety of cultural activities and events, with the aim of doubling household spending on recreation to 6%.

Located 40 kilometres from downtown Riyadh, Qiddiya will provide an unprecedented leisure option for the seven million plus residents of the Saudi capital.

Qiddiya Chief Executive Michael Reininger added “our goal is to create an exciting one-of-a-kind destination that will draw visitors from throughout Saudi Arabia to experience record-breaking roller coasters, innovative rides and attractions, as well as the sporting and cultural facilities that Qiddiya will offer.

“By partnering with a global leader, we know that we are going to deliver something exceptional.”

Six Flags is also currently developing parks in China with Six Flags Zhejiang and Six Flags Chongqing expected to open in 2019 and 2020 respectively.