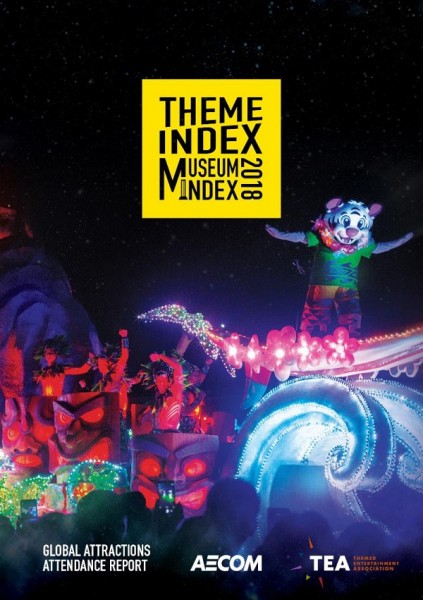 The 2018 TEA/AECOM Theme Index and Museum Index has revealed that visits to themed attractions exceeded half a billion visits for the first time in history last year, with Disney remaining as the world’s top theme park operator and the Louvre in Paris still the world's top-attended museum.

The Themed Entertainment Association (TEA) and the Economics practice at AECOM have released the 2018 TEA/AECOM Theme Index and Museum Index. This annual, calendar-year report tracks growth and evolution in the global themed entertainment industry and tourism destination development.

The 2018 TEA/AECOM Theme Index and Museum Index charts attendance numbers showing the performance of the world's most-visited theme parks, water parks and museums. The tables are accompanied by analysis from industry specialists in the Economics practice at AECOM. The report studies the sector by region (The Americas, Asia-Pacific, EMEA), the global market as a whole and the top operators (Disney, Merlin, Universal, OCT, Fantawild, Chimelong, etc.)

A team from AECOM and TEA will give a presentation based on the new 2018 Theme Index at IAAPA Expo Asia in Shanghai (June 2019), where Chinese-language copies will be available.

John Robinett, Senior Vice President - Economics, AECOM, explained "our figures show that attendance at themed attractions at the major operators has exceeded a half billion visits for the first time in history. This is equivalent to almost 7% of the world population. Factors that have led to this strong performance include the addition of second gates, the continued leveraging of blockbuster intellectual property (IP), and the building of resort hotels adjacent to park properties."

Regionally and internationally, Disney has readily maintained its position at the top of the list. In the United States an increase of more than six million visits at the top North American parks in 2018 was led by Disney, Universal and SeaWorld.

The Americas
Brian Sands, Vice President / Director - Economics, Americas, AECOM, commented "te biggest growth is IP-driven. The big players are in a position to command the big IP - and have full awareness of the power of these franchises and what they can do in a storytelling environment, with innovative experiences and rides, made immersive with state-of-the-art technology."

Asia-Pacific
Disney parks across Asia had a very strong year in 2018, including properties in Tokyo, Hong Kong and the newest, Shanghai Disneyland. Other leading operators in China include OCT, Fantawild and Chimelong.

Chris Yoshii, Vice President - Economics, Asia-Pacific, AECOM, advised “iIn the two years since it opened, Shanghai Disneyland has quickly become a standard-bearer for Asia. Its influence has led other parks to upgrade their offerings and guest experience.”

Beth Chang, Executive Director - Economics, Asia-Pacific, AECOM, stated "the Asia-Pacific sector is doing very well, and the big parks are getting bigger. To make it onto our Asian Top 20, a park needs a minimum of 3.1 million in annual attendance, which is substantial.”

Europe
The 2018 data reveals that theme parks in Europe are increasing attendance by building up their properties into destination resorts. Another trend is acquiring and overhauling smaller, underperforming parks.

Museums
The Louvre in Paris retained its position as the world’s most-attended museum, and several other museums saw record-breaking attendance, including the Natural History Museum and the Victoria & Albert Museum, both in London.

In Washington, DC, attendance at most Smithsonian museums was down or flat, with the exception of the National Museum of African American History and Culture (NMAAHC). In addition, there was record attendance at the Donald W. Reynolds Center for American Art and Portraiture driven by the exhibition of the new portraits of President Barack Obama and First Lady Michelle Obama.

In the Asia-Pacific region, the National Museum of China held its position in the top spot, and the re-imagined Hunan Museum zoomed into the Top 20 in its first year after reopening.

Linda Cheu, Vice President - Economics, Americas, AECOM, said, “Temporary exhibitions and geopolitical stability continue to serve as key attendance drivers for museums in Europe, the global market leader. Museums in China performed very well overall. A key direction being seen all over the world is the ‘mediafication’ of exhibits. Visual moments that can be posted to Instragram are being incorporated at museums to engage those active on social media platforms. Art is being blended into interactive exhibits, allowing visitors to step into, touch, and move through the artwork - and, of course, capture all of this on camera.”

The complete 2018 TEA/AECOM Theme Index and Museum Index is available to download free of charge from the TEA website and AECOM website. It is published first in English, followed shortly by a Chinese-language version.