Historic levels of growth in global theme park industry in 2017 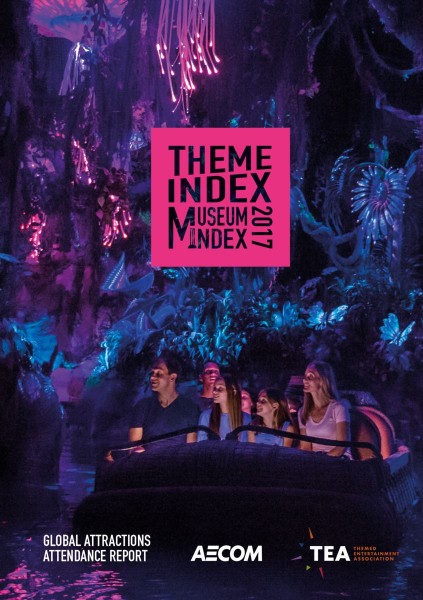 Visitation rises to Disney attractions, theme parks in China and indoor/family entertainment centres drove historic levels of growth for the theme park industry in 2017, according to the latest Theme Index and Museum Index report.

Following a year of mixed results for the global attractions industry in 2016, the latest report from the Themed Entertainment Association (TEA) and consultants AECOM shows the industry has seen massive growth in 2017, with major theme park operators experiencing 8.6% overall growth while the top 25 theme parks expanded volume by 4.7%.

Disney led the market, with the operator gaining close to 10 million additional visitors through the year - a 6.8% increase in visitors - up to 150 million in 2017 from 140.4 million in the previous year.

Disney’s visitation was 84 million ahead of its nearest rival, Merlin Entertainments, which saw its visitation year-on-year rise to 66 million visitors - a 7.8% or 5 million visitor increase. Universal rounded out the top three, with a 4.4% increase of just over 2 million visitors as its closes in on 50 million for the year across its theme park portfolio.

For the top 10 theme parks overall, attendance growth rose to 475.8 million visitors – an increase of 37.5 million. Within the top 10, fourth-placed OCT Parks China enjoyed the biggest growth, increasing visitation by 32.9% to 42.9 million visitors – a staggering rise of 10.6 million people.

Overall, attendance at theme parks in China rose by nearly 20%, with the nation now generating approximately a quarter of overall attendance for major operators.

Commenting on this performance, Chris Yoshii, Vice-President for Asia-Pacific at AECOM, advised “the Chinese market has responded enthusiastically to high-quality theme park offerings, as demonstrated by the success of the Chimelong parks and of Shanghai Disneyland in its first full year of operation, with Universal Beijing on the horizon.” 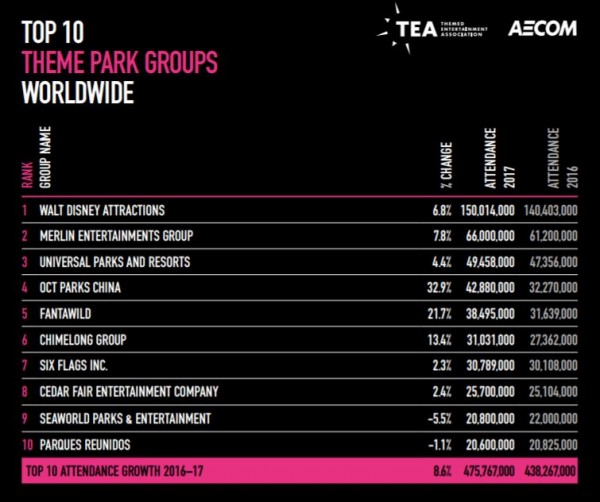 The top 10 global theme park groups in 2017 according to the TEA/AECOM Theme Index.

Asia as a whole saw attendance expand by 5.5%. Korea saw a decline in attendance, attributed to the geopolitical climate that discouraged tourism. Parks in Japan received a small increase in visitation while Hong Kong had mixed results with its Disneyland seeing attendance stabilise at 6.2 million while Ocean Park experienced a 3% decline.

Waterparks
Global waterpark attendance saw a small growth of 1.6%, driven by strong performances in some of the European parks while waterparks in North America had a poor year, attracting 500,000 or 2.9% less visitors than 2016.

Wet’n’Wild Gold Coast was ranked the 19th highest performer among the world's waterparks (and the only Australian attraction to feature in the Index), although its visitation dipped by 5% to 1,180,000 from 1,242,000 in the previous year.

Museums
The Museum Index shows that the Louvre in the French capital of Paris recaptured the top spot as the most visited museum in the world, knocking the National Museum of China back into second place. The French museum experienced a 9.5% visitation increase taking its overall figure to 8.1 million. The National Museum saw a 6.8% increase but welcomed 37,000 people less.

Top 10 Museums Worldwide according to the TEA/AECOM Museum Index. 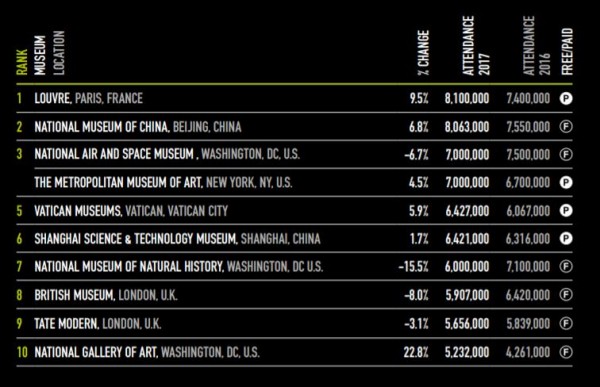 The top 10 museums in 2017 according to the TEA/AECOM Museum Index.

The top 20 museums were relatively flat overall but regional museums had a strong year with 5% growth fed by some new entries and strong performance in Asia. Several museums had remarkable years such as the Victoria and Albert (V&A) with a 25% increase and the National Gallery of Art with a 23% rise.

The report identified several global trends. The development of immersive attractions based on intellectual property is ongoing and being explored globally. Other trends seen in all regions include continuing investment and innovation in water parks, hospitality expansion and interactive guest experiences with role playing.

AECOM Senior Vice-President John Robinett added “on the whole, 2017 reflected a return to healthy growth with significant capital expenditures in the industry, both in traditional attractions, attraction-adjacent hotels, and new, IP-branded indoor attractions.
“With stabilised global economies, and significant planning occurring now for future investment, prospects look good for the industry in the short- to mid-term.”

Key figures from the 2017 Theme Index and Museum Index: