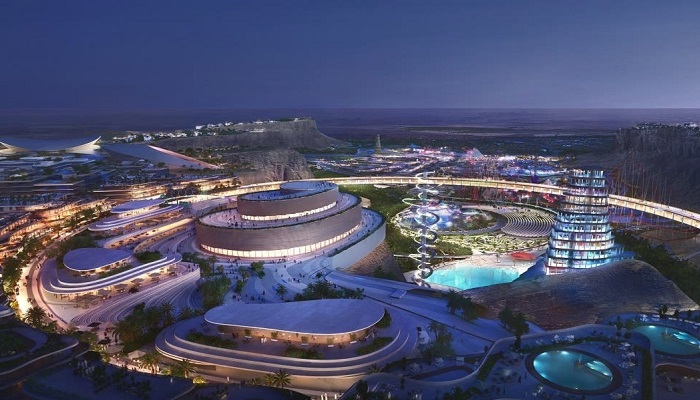 The Qiddiya Investment Company (QIC) has unveiled the masterplan for its Saudi Arabian sports and entertainment resort ‘giga project’ that will feature a Six Flags theme park, a 20,000-seat cliff-top stadium and an 18,000-seat multi-purpose indoor arena.

To be built 45 kilometres from the Saudi capital of Riyadh, the 334 kilometre² site has been divided into five development nodes - Resort Core, City Centre, Eco Core, Motion Core, and the Golf and Residential Neighbourhood.

With the ‘Resort Core’ - a retail, dining and entertainment district with hotels - at its heart, an adjacent 15-hectare outdoor entertainment and sport area  will be home to Six Flags Qiddiya, as well as a water sports and entertainment attraction, which includes a hotel, and a motor sports facility called ‘Speed Park’.

The City Centre will feature various sports venues, including a 20,000-seat stadium, an 18,000-seat multi-purpose indoor arena, an aquatic centre, and a sports hub.

An arts centre will include a performing arts theatre and multiplex cinema. City Centre will also have a mosque, shopping, F&B, a private school, hospital and high street.

Elsewhere, the Eco Core will house a golf course and outdoor sports offerings, while the Motion Core will put on events and experiences.

Finally, the Golf and Residential Neighbourhood will boast an 18-hole golf course, a luxury resort hotel and spa, and equestrian facilities.

Set to begin opening from 2022, the project aims to deliver key tenets of the Kingdom’s Vision 2030, an initiative that seeks to diversify the economy away from the oil sector.

Aiming to become the Kingdom’s ‘Capital of Entertainment, Sports and the Arts’, the Qiddiya‘s masterplan was created with Danish architectural company Bjarke Ingels Group, has been designed with careful consideration to the natural patterns of the site, giving rise to a green-belt network carrying visitors throughout the property on roads, bike paths and walkways built within an enhanced landscape environment.

Introducing the project, QIC Chief Executive Michael Reininger stated “the people of Saudi Arabia share the universal desire for enriching experiences, and our plan allows Qiddiya to unlock access to these experiences in a new and culturally relevant way, encouraging personal and professional pursuits that foster enrichment.

QIC was formed in May 2018 as a closed joint-stock company wholly owned by the Public Investment Fund (PIF) of Saudi Arabia. The project broke ground in April 2018 and phase one is set to open in 2022. A three-phase approach is currently underway for the entire project.

There are four giga-projects currently being built in Saudi Arabia - Qiddiya, Al-Ula, the Red Sea Project and Neom. In September, the PIF announced a new uber-luxury resort called Amaala.

Neom is a planned cross-border city in the Tabuk Province in the Kingdom’s north west. It is planned to incorporate smart city technologies and also function as a tourist destination. The site is near the Red Sea and the borders that Saudi Arabia shares with Egypt and Jordan.