First ever admission of women to Saudi Arabian sport stadium 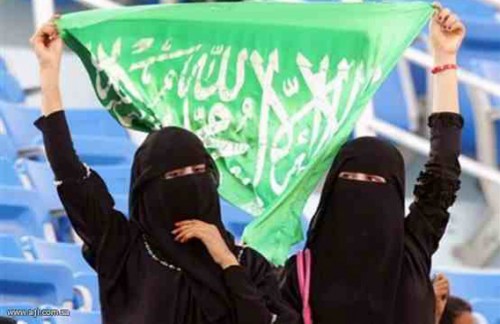 King Fahd Stadium in Riyadh, Saudi Arabia welcomed women through its gates for the first time in its history to celebrate the Arabian Gulf nation’s 87th anniversary.

The Kingdom’s strict implementation of Sharia law from the Wahhabi brand of Sunni Islam bans gender mixing in locations such as stadiums and cinemas.

However, the national day, part of the Saudi Government’s Vision 2030 initiatives to expand its economy and move away from oil by creating new employment sectors for young Saudis, saw the ban lifted - albeit temporarily.

While women remain banned from entering venues to watch sporting events, the move is seen as significant in the Kingdom allowing greater freedoms for women and comes six weeks after Saudi Arabia announced that physical education for girls would for the first time be included in school curricula.

To accommodate the Kingdom’s strict gender segregation, sections of the Stadium were delineated into sections for men and for families, much like what happens in other public spaces.

Commenting on the admission of women to a sporting venue, regular Australasian Leisure Management contributor Dr James M. Dorsey writes “the move knocks down a psychological barrier even if it is primarily designed to project the Kingdom in a more favourable light amid fierce criticism of its human rights record and conduct of the war in Yemen and to promote Crown Prince Mohammed bin Salman’s reform agenda of greater economic diversification and greater social freedom.

“To maintain support for his agenda, which is as much designed to initiate badly needed economic and social change as it is intended to prevent any form of political liberalisation, Prince Mohammed has in recent weeks employed two strategies: using football to boost his image in a football-crazy country, and building an entertainment industry in a kingdom in which concepts of fun were long frowned upon, if not banned.

“Sport is a key pillar of 'Vision 2030' as part of a bid to improve health in a country that has some of the world’s highest obesity and diabetes rates.”

As part of national day events, being held in 17 cities over four days and attracting more than 1.5 million Saudis, a concert in the Red Sea city of Jeddah featured 11 Arab musicians, plus fireworks, air acrobatics and traditional folk dance shows.

Under Saudi laws, women are not allowed to drive, despite some Government reform attempts aimed at boosting female employment. In addition, women are unable to travel, study or visit a doctor without a male guardian’s permission.