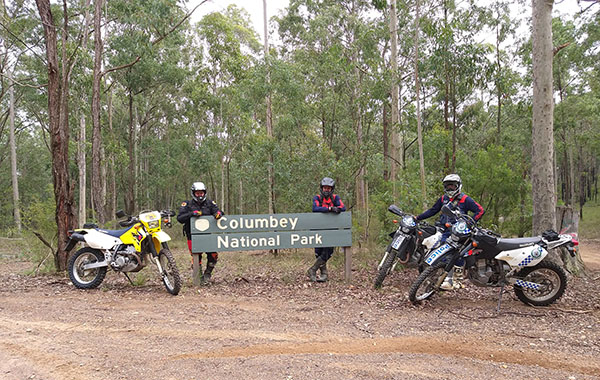 NSW National Parks and Wildlife Service (NPWS) and local NSW Police have deployed trail bikes to maintain the safety of the local community and visitors to national parks in the Barrington Tops region and other local reserves following the success of recent inter-agency trail bike patrols.

The joint law enforcement operations are tackling illegal activity and anti-social behaviour in the area’s reserves, and are also helping to protect local ecological communities which are home to many rare and threatened plant and animal species.

NPWS Barrington Tops Area Manager, Anthony Signor explained “while the vast majority of visitors to local parks are well behaved, some people unfortunately engage in illegal activity. This is not only dangerous, but also disturbs park neighbours and the general public, and puts our local wildlife and park assets at risk.

“The patrols provide us with an opportunity to work closely with local Police to address issues such as the riding of unregistered motorbikes on public land and driving vehicles in closed areas without authorisation. These activities damage the environment and our fire trails, which is both expensive to fix and impacts our ability to fight wildfires.

Signor added “as the June long weekend approaches, NPWS would like to remind visitors in the area to abide by NSW law and NPWS regulations, by observing and complying with all signage around our Parks.

“We want to protect the unique environment of the Barrington Tops region, as well as make visitors and our local community feel safe while they enjoy our beautiful parks. There are also numerous public trails available across the region’s reserves for four-wheel drives and for licenced riders on registered motorbikes to legitimately enjoy.”