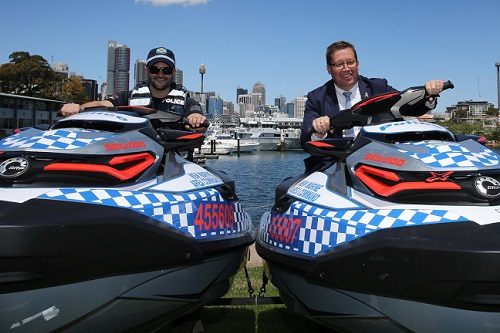 The NSW Police Marine Area Command will have a new squad out on the seas ensuring water safety with the addition of 14 new jet skis funded by the NSW Government.

The new Marine Enforcement Team is a versatile mobile response unit that can be deployed quickly to ensure anti-social and dangerous behaviour on NSW waterways is contained.

The team will be comprised of officers from the Marine Area Command and will be primarily located within the Sydney Metropolitan area, as well as Newcastle and Port Stephens, during the boating season.

NSW Minister for Police Troy Grant said people should be able to head out on NSW waterways and enjoy their day without hoons and trouble-makers causing problems; that is why the NSW Government has invested more than $140,000 in 14 new jet skis for the Marine Area Command.

Minister Grant stated “with Christmas and New Year around the corner, the jet ski squad will be launching major enforcement and crowd control operations during the busiest period on our rivers and harbours.

“Given the ability of jet skis to manoeuver swiftly around marine vessels, this squad will be a great addition to the Marine Area Command fleet.”

Marine Area Commander Superintendent Mark Hutchings said the Marine Enforcement Team is an additional resource that will allow officers to focus on proactive policing, adding “Police will be on the water throughout the season to enforce maritime laws, conduct random breath and drug tests, carry out safety checks on vessels, check boat licences, and ensure any other jet ski riders enjoy the sport safely.”

NSW Minister for Roads, Maritime and Freight Melinda Pavey said the number of jet ski registrations continues to grow at around 10% per year, which represents the fastest growing segment of the industry.

Minister Pavey added “while the vast majority of riders use their craft in a responsible manner, personal watercraft continue to be over represented in serious injuries and complaints as a result of dangerous use and anti-social behaviour.”

Over the past two years the NSW Government has aimed improve waterway safety through joint patrols, sharing of assets and sharing of intelligence.”

The NSW Police Force will continue to work with a variety of agencies including Roads and Maritime Services throughout the summer months to develop and implement strategies that will reduce risk to the community.