Safety concerns after dangerous beach named one of Australia’s best 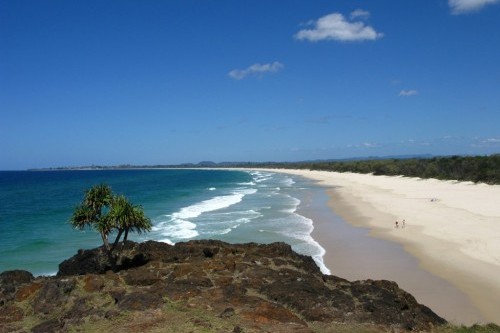 A northern NSW coastal community is becoming increasingly uneasy about the promotion of a local beach notorious for its rips and undercurrents.

Dreamtime Beach off Fingal Head has been featured on social media and was recently listed as the third best Australian beach of 2018 on the popular website 101BestBeaches.com.

However, the Beach has also been the scene of five drowning deaths since 2015 — the most recent earlier this month, when a 22-year-old man jumped off the neighbouring rocky headland.

"It's just going to increase the traffic here, and it's not a safe area for people to swim."

Signs at the beach clearly warn it is dangerous and point visitors to a patrolled area at Fingal Beach, 400 metres away.

A roundtable meeting of community leaders last Friday was told by surf lifesaver David Dempsey that many people were ignoring the signs.

He advised "on Australia Day, we had maybe six or seven people swimming between the flags, and I went over to south (Dreamtime) Beach and it was probably 300-plus."

Kudzius grew up in the area and has seen enormous change, advising "traditionally it's been a pretty quiet place, but in the last four to five years we're seeing up to 50-seat buses turn up with tourists."

Tweed Shire Council General Manager Troy Green says an answer may be to put up even stronger warning signs, telling the ABC "the only enhancement that we could now make at the beachfront would be to have signs showing how many people have died there since 2015."

There's also been a local community push to have lifebuoys or so-called 'angel rings' installed on the Fingal Point headland.

Efforts to install the lifebuoys were delayed because of a dispute with NSW Crown Land over insurance.

The insurance dispute was resolved last November and the rings are expected to be installed next month.

The Council, is not convinced about the merits of installing lifebuoys, with Green adding "they could absolutely help save a life, but they could also give a false sense of security.

"People really need to swim between the flags."