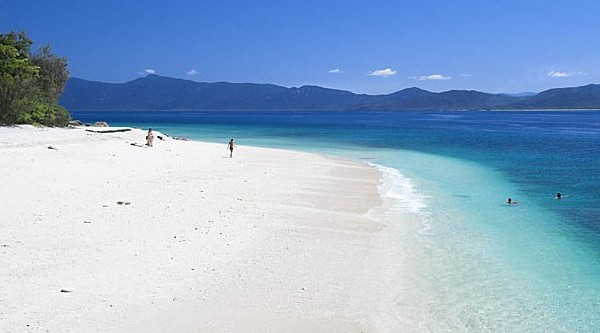 The white coral beach with only a small stretch of sand located on Fitzroy Island,  some 29 kilometres south of Cairns,  scored the top spot out of 11, 761 beaches. Western Australia's Horrocks Beach was named Australia's No.2 beach – also being the country's best mainland beach.

Last year, Cossies Beach on Australia's Cocos and Keeling Islands was named the country's top remote beach, but dropped back to fourth spot this year behind Dreamtime Beach in NSW, and ahead of Burleigh Heads in Queensland.

Assessed by ‘beach expert’ Brad Farmer, the rankings were scored according to three criteria - affordability, accessibility and authenticity - and included beaches that have a ‘yet to be discovered’ element.

Significantly, the list ignores some of Australia’s best known beaches such as Syndey’s Bondi and Manly Beaches and Queensland’s Surfers Paradise, with landscape,  location and culture being taken into account.

Farmer, a conservationist,  has been travelling to and researching Australian beaches for over 30 years. He and his colleague Professor Andy Short, a coastal geomorphologist, spent several months travelling the country to assess beaches for the 2018 Australia's top beaches list.

Farmer and the Australian Minister for Foreign Affairs, Julie Bishop, announced the list at Perth’s Cottesloe Beach, named the 15th best beach in the country for 2018.

For more information go to www.101bestbeaches.com