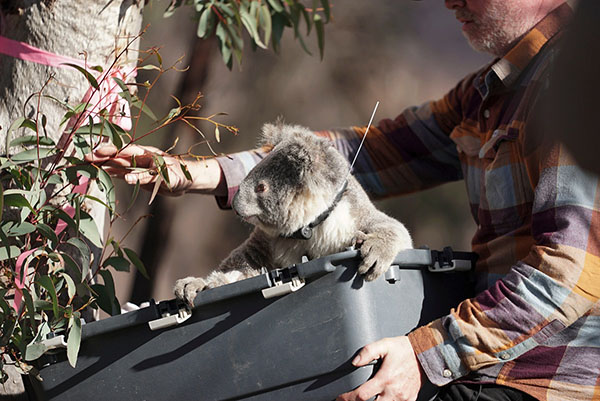 A $257,000 donation from Minderoo Foundation will assist researchers at the Australian National University (ANU) to examine how koalas recover after fire and how fire impacts their habitat, including if their dietary needs can be met.

The funding forms part of Minderoo Foundation Fire Fund’s $50 million Wildfire and Disaster Resilience Program, which aims to build an evidence base for interventions for the survival of Australia’s treasured wildlife in post-bushfire landscapes.

The ANU research project will examine how fire impacts eucalypt leaf chemistry and nutrition for koalas. The researchers will also determine whether koalas can feed on epicormic growth – buds that lie dormant under the bark of a tree and emerge after fire.

ANU researcher, Dr Kara Youngentob, said the project would help determine when koalas in care could be returned to their habitats and added “this work will help us achieve the best welfare outcomes for koalas as they are returned to burnt landscapes.

“We will examine how fire affects the nutritional quality of koala habitats and eucalypt trees after a fire. Our research is critical for the development of strategies that minimise bushfire impacts on wildlife.

“This information is urgently needed to help wildlife carers determine when animals can be safely returned to previously burnt landscapes.

“I want to thank Minderoo Foundation for their generous support for this important work.

“With koalas facing the very real threats of localised extinctions and widespread habitat loss, as well as reeling from the unprecedented fires we’ve suffered this season in Australia, this is an investment in the long-term survival of one of this nation’s and the world’s most iconic animals.

“This is a major boost for koala conservation and management.”

The research builds on care given to koalas directly affected by fires at ANU earlier this year, with the initial work also made possible by a generous $100,000 donation from Two Thumbs Wildlife Trust – which was burnt down in this year’s catastrophic fires.

“What’s also really touching is that this donation from the Two Thumbs Wildlife Trust has been made in the memory of Ian McBeth, Paul Hudson and Rick DeMorgan Jr – who were killed on a firebombing operation when their C-130 Large Air Tanker hit the ground after dropping fire retardant on Two Thumbs Wildlife Trust’s koala sanctuary at Peak View, New South Wales in January.

“We are really excited that Minderoo Foundation are now also joining these efforts and hold great hope for the future.”

Minderoo Foundation Fire Fund Chief Executive, Adrian Turner notes “of all the images we saw from the bushfire season, injured and suffering koalas came to represent the terrible toll on Australian wildlife through loss of life, injury and habitat. Some estimate that as many as one billion animals lost their life in the fires.

“Dr Ford and her team are working hard to make sure the surviving animals have the best chance at success when they are released. That information is helping koalas right now, but also builds our knowledge for long term resilience of our unique Australian wildlife and will improve the response to any future disasters.”

In addition to examining koalas’ diets, the ANU researchers will track the fate of koalas from fire-affected areas and those that were not taken into care in nearby burnt and unburnt areas. In addition, they will investigate a potential rapid method to provide useful koala heath information from their droppings.

The research is also supported by the NSW Government Department of Planning, Industry and Environment under the NSW Koala Strategy and the Australian Government Wildlife and Habitat Bushfire Recovery Program.