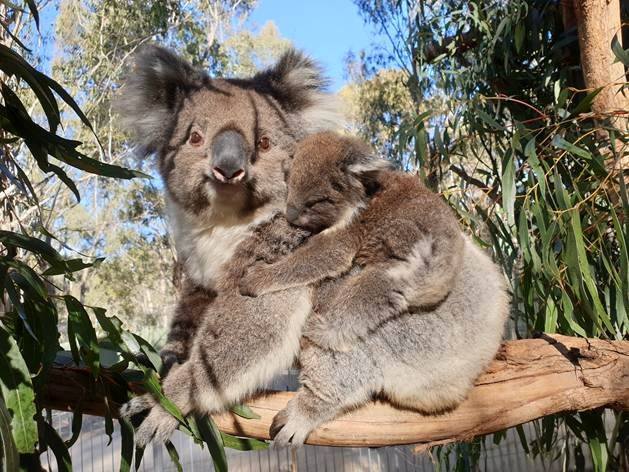 Koalas evacuated from the encroaching Orroral Valley Bushfire earlier in the year have returned to a refurbished and upgraded display enclosure at Tidbinbilla Nature Reserve.

ACT Minister for the Environment and Heritage Mick Gentleman welcomed the koalas to their new home and invited Canberrans to visit them in Tidbinbilla.

Minister Gentleman advised “after being evacuated to ANU earlier this year to escape fires and floods, Tidbinbilla’s koalas – Jed, Yellow, Scully, Billa, Gulu and a young, currently unnamed male – have returned to their new and improved public enclosure.

“The koalas have a new member joining their family, with the Tidbinbilla wildlife team finding a joey in Yellow’s pouch. We expect the little joey to emerge from the pouch in a few months’ time ready for warmer weather.

“The koalas were returned in good health to Tidbinbilla in late February and have been housed behind the scenes in secluded enclosures while the team refurbished the public display enclosure in the Eucalypt Forest.

Minister Gentleman added “the upgrades include new ‘furniture’ in the form of trees and logs for the koalas to enjoy. There’s also new clear fencing, a viewing platform and seating to better allow visitors to experience these iconic critters.

“Tidbinbilla’s first foray into threatened species conservation began with the introduction of koalas in 1939. The current family of koalas were introduced following the devastating 2003 bushfires, which wiped out all-but-one koala later named ‘Lucky’.

“I would like to thank our partners at ANU for caring for our koalas over the summer period. The quick response of the Tidbinbilla and ANU teams meant we were able to safeguard Tidbinbilla’s current koala population from the extreme weather events.

“I encourage Tidbinbilla visitors to see the koalas in their improved enclosure and to keep an eye out for them in the nature reserve’s popular Eucalypt Forest, which has now been reopened. You can see a variety of other free-ranging wildlife along this forest walk, including long-noosed potoroos.”