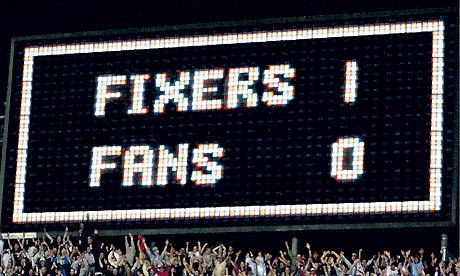 Federal Minister for Sport Mark Arbib has welcomed the announcement that match-fixers could be jailed for 10 years, after State and Territory justice ministers today agreed to introduce nationally consistent criminal offences.

The Standing Council on Law and Justice supported the development of consistent national match-fixing offences with a maximum penalty of 10 years imprisonment for those who are found guilty of using inside information for the purposes of placing bets where they know the outcome of a sporting event has been fixed.

There will be similar penalties for those who engage in match-fixing conduct or who encourage others to do so.

Senator Arbib said the steps taken by the Standing Council on Law and Justice complemented the work of Australia's Sports Ministers, who in June adopted a National Policy on Match-Fixing in Sport, stating "the introduction of specific match-fixing offences will send the message to anyone seeking to corrupt sport that we are serious and we won't tolerate that behaviour.

"We want to make sure we do everything possible to send a message to those people who want to be involved in match-fixing that there will be jail time, and it won't be a light punishment.

"The decision to adopt consistent national match-fixing offences is an outstanding result for sport and fans of sport.

"I am pleased that all Australia's governments are presenting a united front against the scourge of match-fixing.

"The only way we can deal with this threat is by working together to ensure we have a national policy underpinned by legislation, codes of conduct and industry standards."

Senator Arbib thanked Attorney-General Robert McClelland, Justice Minister Brendan O'Connor and state and territory Attorneys-General, who will now seek final agreement from their governments on the proposal for match-fixing offences and penalties.

Senator Arbib concluded "Australia is putting in place a comprehensive strategy to deter and deal with match-fixing, consisting of codes of conduct and education for players and officials, consistent national regulation of sports betting and now nationally consistent criminal sanctions.

"This agreement represents a very important milestone in the delivery of our match-fixing policy and places Australia at the forefront, internationally, in the fight against match-fixing."