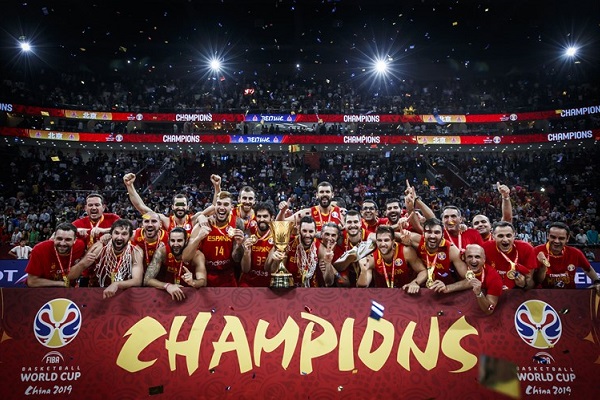 The FIBA Basketball World Cup 2019 achieved record-breaking results with a TV audience reach of over three billion and generated a further 1.5 billion video views on social media ensuring the flagship event secured more global coverage than ever before.

An analysis of the World Cup, which ran from 31st August to 15th September, with 32 participating teams was FIBA’s biggest yet, reflected in the record-breaking global engagement and the ever-increasing popularity of basketball globally.

World governing body FIBA teamed up with over 70 broadcast partners to deliver coverage in 190 territories, resulting in a total cumulative average TV audience increase of over 80% compared to the last World Cup in 2014. The final alone had a total global reach of 160 million. In Spain, with a market share of 46% for the final, over 10 million tuned in while 6.2 million watched the full game, making it the country’s most successful basketball game ever.

Chinese basketball fans were at the heart of the special atmosphere throughout the tournament, with the interest in the host nation resulting in the World Cup generating the two highest live ratings of the year on CCTV: China vs Poland with a total reach of 68 million, and China vs Korea with a total reach of 60 million. The most-watched games on Tencent were China vs Venezuela which generated 52 million live views and China vs Poland with 50 million people following live on Tencent.

Releasing the findings, FIBA Secretary General, Andreas Zagklis stated “the FIBA Basketball World Cup 2019 has been the World Cup of a new era and of new records. On the court, players set new standards and off the court we saw our largest ever audience reach on TV and social media.

“These record statistics are more than just numbers, they tell the human story of how globally-loved basketball is. They demonstrate that more fans than ever are watching and engaging in the FIBA Basketball World Cup, which has evolved into a successful major sporting event."

The official FIBA Basketball World Cup 2019 mobile app, presented by Tissot, was downloaded over two million times. Fans enjoyed a personalized experience, with the ability to follow favourite players and teams. The app also enabled fans to receive live statistics and watch video highlights of the most memorable moments. The app and the official website, available in 12 languages, had 146 million views throughout the World Cup combined.