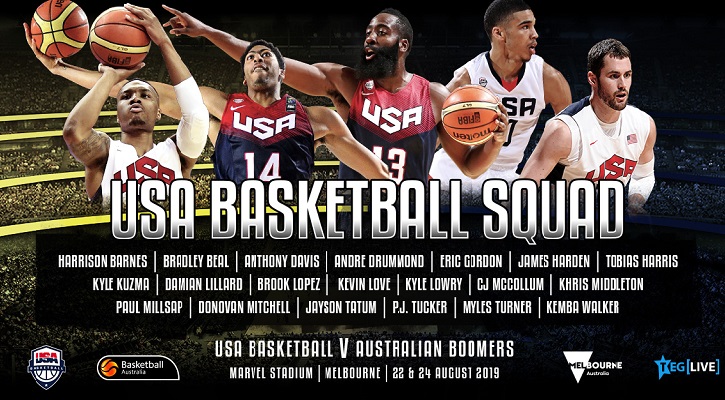 With the withdrawal of elite basketball stars from the International Basketball Series games at Marvel Stadium this week leading to reports of unhappy fans, promoter TEG Live is understood to be offering refunds to some ticketholders.

A communication from TEG Live customer service, as shared by a fan who had requested a refund, read as follows:

"Thank you for your correspondence regarding your tickets to attend the game between USA Basketball and the Australian Boomers at Marvel Stadium, Melbourne.

"We acknowledge your disappointment regarding the changes to the USA Basketball squad, although we note that these games will still feature the best available players who will compete for their respective nations at the 2019 FIBA World Cup in China, commencing on 31 August 2019. USA Basketball are shortly to finalise their 12-man squad, full of NBA players, while the Boomers team will feature up to 6 players with NBA experience.

"Accordingly, we are very hopeful that you will decide to still attend this historic game to witness the best Australian Boomers team ever assembled taking on the current FIBA World Champion and Olympic Champion, the United States, in front of around 50,000 fans. The players are now all training in Melbourne and we’re currently building the massive production and drop in court at Marvel Stadium, which looks incredible.

"However, we have considered your particular circumstances and if you no longer wish to attend the game, please confirm by return email and we will arrange for cancellation of your tickets and a refund as soon as practicable.

“Again, we are hoping you will still attend to cheer on our mighty Boomers at Marvel Stadium!”

Each game is expected to attract a crowd in excess of 50,000.