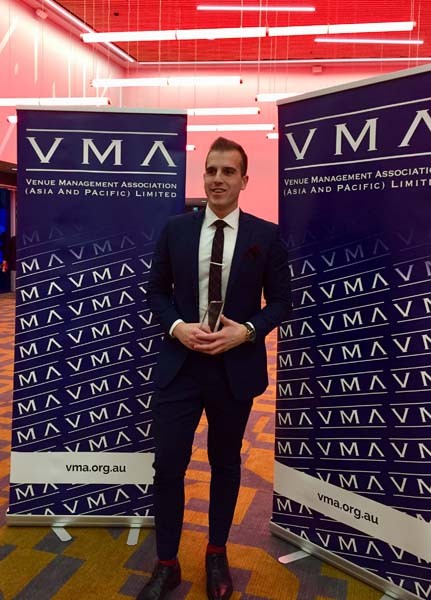 A member of the Marvel Stadium team since 2016, Saban has been involved in a diverse range of world-class events from AFL, cricket, music events and large-scale concerts.

His start in the industry began at the Sports Education Development Australia (SEDA). Through his studies, Saban realised event management was his passion and he went on to complete a Bachelor of Business majoring in Event Management at Victoria University.

Commenting on his career, Saban stated “at university, it became really clear to me that the events management industry invests heavily in their professionals. I made a promise to myself that once I got my foot in the door, I would make sure to invest back into the industry and the Young Achiever of the Year award is a testament to this.

“I feel honoured to be recognised by the Venue Management Association for my contribution to the industry in 2018 and am very proud of the events I have been involved in and my achievements."

His dedication to fulfil the promise he made while studying has seen him achieve many incredible industry milestones, most notably a Movember campaign last year that raised more than $33,000 for the Movember Foundation.

Identifying the need to address mental health, particularly for those in his field who often work long and challenging hours, Saban’s initiative was attended by industry peers from Melbourne’s biggest sporting venues and associations including AFL, Olympic Park, MCG and the Victorian Racing Club.

Throughout his tenure at Marvel Stadium - one of the busiest multi-purpose stadiums in the world, Saban’s responsibilities have included looking after two of the stadium’s tenant AFL clubs, St Kilda and the Western Bulldogs, along with the Big Bash League, Melbourne Renegades and assisting with the delivery of international music acts including Foo Fighters, Ed Sheeran, Taylor Swift, Justin Bieber and Adele.

The Big Bash League Semi-Final and Final matches held at Marvel Stadium in January 2019, saw Saban and the team turn around two major BBL matches - transforming the stadium to host the BBL final for over 40,000 fans.

"To be called-out and awarded Young Achiever of the Year amongst your peers is a huge achievement and a testament to the hard work Eray puts in week after week.

“Eray played an instrumental role in a number of events we hosted last year, including the AFL’s third pride match between St Kilda and the Sydney Swans and Maddie’s Match, which helped raise over $1.6M for the Maddie Riewoldt’s Vision to fund medical research into finding a cure for Bone Marrow Failure Syndromes.

“Eray is a dedicated young man and his passion for the event industry and his work is second to none.".

The VMA Young Achiever of the Year award is for professionals in the industry who are under 30 years of age.

As Young Achiever of the Year, Saban receives complimentary registration and accommodation to the 2020 Asia-Pacific Venue Industry Congress to be held at the Gold Coast in May 2020.

The 2019 Venue Industry Award winners were announced at the Gala Dinner and Awards Ceremony held in Melbourne on Tuesday, 28th May as part of the 2019 Asia-Pacific Venue Industry Congress.