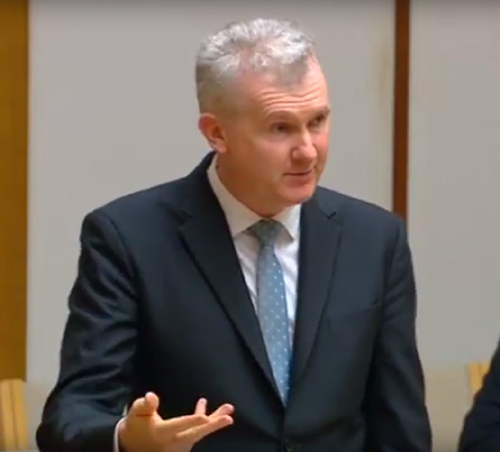 In his speech, Burke criticised the Swiss-based Viagogo for allegedly allowing ticket scalpers to sell multiple copies of the same ticket online, so that all but one of the purchasers are left with an invalid ticket.

Burke stated “we do need to find a way of making sure …  that when tickets say they’re ‘not transferable’ and ‘not to be resold’, that we acknowledge the site doing the reselling is engaging unlawfully.

“And when they’re selling something that turns out to not be valid, they’re engaging in theft.”

Burke referred to advise that he had received from promoter Frontier Touring about Justin Bieber fans who had flown from New Zealand to Australia for the singer’s most recent tour, only to find out that their tickets were invalid.

He advised “Viagogo’s official policy is if you turn up and it turns out to be a fake ticket, they’ll give you your money back. Well that’s not much good if you’ve flown to be at the venue.”

Burke also accused Google and other search engines of profiting from ads which direct Australians to fraudulent tickets on Viagogo.

He continued “can we continue with a situation where the search engines are receiving advertising dollars to continue to promote sites like (Viagogo)?

“We should find if there’s a way of working with the search engines to get a sensible outcome here, but we cannot allow there to be a continued situation where companies effectively operating in Australia are receiving advertising dollars to direct Australians to purchase stolen and illegal goods. That cannot be a valid commercial arrangement.”

In his speech, Burke also recounted his own recent experience at Bluesfest, when a friend of his daughter couldn’t enter the festival because their family had allegedly purchased fake tickets on Viagogo.

Viagogo was referred to the Australian Competition and Consumer Commission (ACCC) earlier this year by consumer advocacy group CHOICE.

When Viagogo entered the Australian market in 2013, it released research showing that 500,000 Australians a year were being caught out by online ticket scams.

At the time, Viagogo Chief Executive Eric Baker said the online ticketing platform would be able to guarantee security and authenticity of tickets purchased online.