500,000 Australians a year caught out by online ticket scams 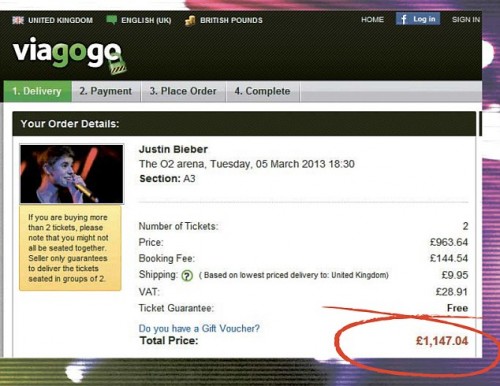 Half a million Australians have been affected by ticketing frauds and online scammers in the last 12 months according to newly released research.

The research, commissioned by ticketing reseller Viagogo as it prepares to launches in Australia, was undertaken by Galaxy Research.

It shows that 500,000 people were scammed when purchasing tickets on the web, and in particular from third-party sellers on auction website eBay and Gumtree, either turning up to concerts and events without knowledge that they’d purchased an invalid pass or never receiving tickets they’d paid for.

The Galaxy Research report also shows that of those surveyed, 88% were most concerned about guaranteeing security and authenticity of tickets purchased online.

“We guarantee that if you’re a consumer or a fan and you want to buy tickets to show that you’re going to get the tickets on time, they’re going to be the tickets as advertised, and they will be authentic.”

However,  Baker advised that ticket prices on Viagogo “tend to be within about 15% to 20% of face value, so they might be higher and in some cases lower …  but we’re serving the fan, at the end of the day that is who we work for.”

As part of their Australian launch, Viagogo has struck potential partnerships with Collingwood and Richmond football clubs and is in discussions with representatives of the music industry, with a goal to providing a fan-to-fan secondary ticket market that it believes is not being catered to efficiently by existing ticketing agencies.

Baker suggest that eBay and Gumtree “just don’t work very well for tickets” adding “they’re very good for tables or selling bikes or these types of things but if it’s a time sensitive item like a ticket, you’re buying tickets to go see a Bruce Springsteen (for example) you have to get them on time because if it turns out they don’t work out - you might miss that opportunity forever.”

The Springsteen example is timely given the backlash that sprung up after tickets for his forthcoming Australian tour after tickets began appearing online at exorbitant prices; ranging rom $400 from sellers on Gumtree, up to $600 on eBay, and nearly $800 on Viagogo itself.

The spike in online resales also prompted Ticketek and Ticketmaster to admit that ticketing bots had indeed been used to snaffle up a large proportion of ticket sales.

The ticketing upset was enough for promoters Frontier Touring to issue an official statement damning “unscrupulous scalpers”, before Frontier Chairman Michael Gudinski himself warned fans over being “duped” by online scammers before more dates were added to meet demand the Bruce Springsteen Australian Tour.

Despite being lumped in with the negative views of ticket scalping, Baker is keen to distance their online platform from providing a haven for illegitimate ticket exchanges, pointing towards the platform’s consumer tracking and security measures stopping scammers from ‘abusing’ their system.

He added “if you were a scam artist and you had fraudulent tickets to sell … you wouldn’t do it over an audit-able, trackable, monitor-able system like Viagogo. You would probably do it on a street corner or on eBay.”