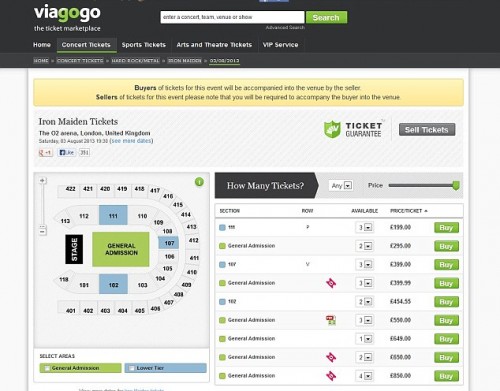 With countries including the UK and Italy considering banning secondary ticketing websites, music industry website IQ has reported that the latest legal action against the Switzerland-based ticket reseller related to the speculative selling of tickets for a postponed show by Joaquín Sabina in A Coruña (Corunna), Spain, next July.

In a joint statement, the promoters of Sabina’s Lo niego todo (I deny everything) tour, TheProject, Get In and Riff Producciones, and his management company, Berry Producciones, say they are “outraged” and intend to bring legal action against Viagogo for the fraudulent listing of “tickets that do not exist”.

The lawsuit mirrors one filed by SIAE in late January, in which the Italian collection society alleges Viagogo listed tickets for a Vasco Rossi show in Modena before they went on sale on the primary market.

Viagogo also allegedly facilitating the illegal resale of tickets for the Euro 2016 tournament in France. In the UK, Viagogo representatives will be compelled to appear Members of Parliament later this year as part of a wide-ranging inquiry into ‘ticket abuse’. It is currently also being investigated by the UK’s Competition and Markets Authority and tax agency HMRC.

Ticket touting in person is illegal in Spain, but there is no legislation specifically targeted at online resale.

While Victoria and Queensland have limited anti ticket sclping legislation, Australia currently has no legislation against ticket touting and resale, with Federal Senator Nick Xenophon a lone voice calling for a “prohibition on ticket reselling” for anything more than 10% above the original price.

Responding to the 2014 Senate inquiry into ticket scalping, the Federal Government's Economics References Committee and Education, Employment and Workplace Relations References Committee rejected the idea of legislation, suggesting that such matters be dealt with by industry self regulation or the Australian Competition and Consumer Commission (ACCC).

However, with the emergence of automated ‘bots’ that auto-buy sought-after seats leading to inflated prices for popular events as well traditional scalpers, key industry figures are calling for action.

Speaking to Australasian Leisure Management today, a senior industry source stated “it is another example of the strong stand being taken against scalping by most stakeholders in many jurisdictions around the world.

“We need the ACCC and state consumer bodies to take action on behalf of Australian consumers who are being misled regularly about tickets offered on internet ‘resale’ sites.”