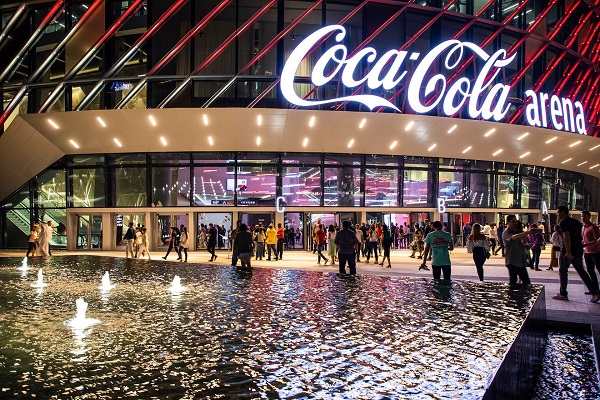 Set to establish Dubai as a new stop on the global touring circuit for the world’s best acts in music and entertainment, the new Coca-Cola Arena has staged its first event.

Opening on the 6th June with a show by the Canadian comedian Russell Peters, and due to be followed by Maroon 5 performing on 14th June, the Coca-Cola Arena will transform the face of the entertainment and events scene in Dubai, helping to cement the city’s position as a major global destination for tourism and trade.

With a capacity of 17,000, the arena becomes the largest multi-purpose indoor arena in the region and, by incorporating climate control throughout the building, the only arena of its kind between Istanbul and Singapore to support a year-round program of events, even in the hotter summer months.

The arena is situated in City Walk, one of Dubai’s most vibrant urban lifestyle neighbourhoods, surrounded by restaurants, shops and entertainment facilities.

An LED strip light system covers the façade to create a dramatic effect as the building becomes illuminated with changing colours at night-time, animating the surrounding area and drawing people in.

Internally, the adaptable design features a rolling modular stage, automated drapes and a retractable seating system, creating a more intimate space for smaller-scale events which can quickly transform into a large-scale arena.

As well as the event spaces, the facilities include four sports changing rooms, eight artist dressing rooms, more than 35 food and drink outlets and 42 corporate suites that redefine the premium hospitality experience for the region. The arena also provides first-rate accessibility with 28 wheelchair spaces and companion seats. 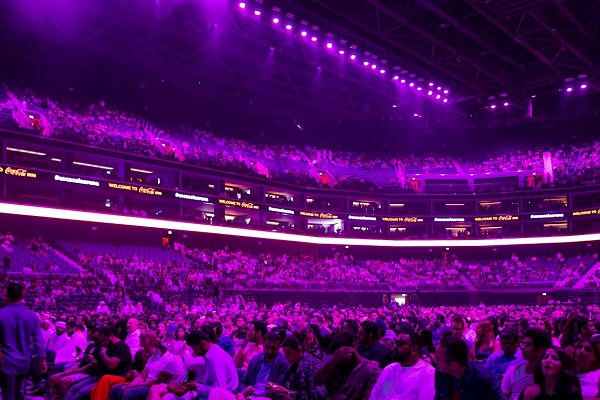 Welcoming the opening, Guy Ngata, AEG Ogden’s Chief Executive of Coca-Cola Arena, stated “with Coca-Cola Arena, Meraas have shown great vision in building a new home for live entertainment in the heart of Dubai further enhancing the Emirates’ potential as a major destination for some of the world’s most prestigious events.

“AEG Ogden are very proud and excited to be operating the venue which has seen the very best people in the world across many sectors come together to create what is undoubtedly a fantastic arena and fitting for the city in which the venue calls home.”

The venue was designed by global architecture firm Populous, for whom it represents its first arena concept design in the Middle East.

Populous, the firm which designed London’s O2 Arena and the T-Mobile Arena in Las Vegas worked with the operator of both celebrated arenas, AEG as well as Brisbane-based AEG Ogden, to create the concept design for the Middle East’s new premier entertainment venue.

Commenting on the venue, Populous Principal Gary Reeves stated “the Coca-Cola Arena sets a new benchmark for entertainment venues in the Middle East.

“The design takes inspiration from world-class arenas like London’s 02 Arena to create a major new entertainment destination for Dubai; somewhere people will gather both before and after events, bringing new activity and custom to the already thriving City Walk district.”