Dubai Arena on schedule to open in 2019 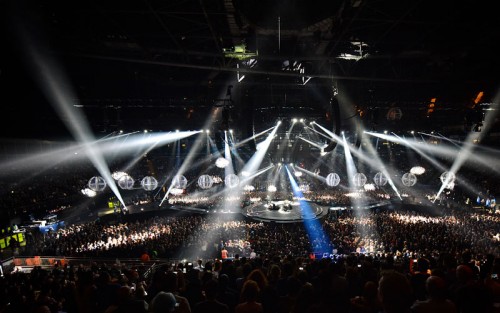 UAE-backed holding developer Meraas has announced that work is progressing at the new 17,000-seat Dubai Arena after the installation of its active-lit façade.

Work on the venue’s external infrastructure and landscaping is also underway, with finishing touches being made to the first of the facility’s 46 hospitality suites.

The arena has now seen its roof, façade steel structure and over 80% of the roof catwalks finished, along with all concrete, structural and block works. Installation of seating is underway, with the rigging equipment, scoreboards, lighting and sound system to be fitted from next month.

Lifts and escalators have also been installed, with the remaining electrical and mechanical works progressing on schedule.

Located at City Walk, a popular Meraas lifestyle destination, Dubai Arena is scheduled to open in 2019. It is being operated by Australian-based international venue management company AEG Ogden.

Once operational, the Dubai Arena is set to host end-stage, central and half-stage concerts, along with sports such as tennis, basketball, boxing, volleyball and ice hockey. It is located at City Walk, a popular Meraas lifestyle destination.

Looking forward to its opening, Meraas Chairman Abdulla Al Habbai stated “every city is known for something - but few, if any, can compare to Dubai when it comes to leisure and entertainment experiences. Dubai Arena has been designed to enhance the city’s reputation as a destination for world-class events and hospitality and will transform the industry throughout the Middle East.

“We are confident that Dubai Arena will position the city on the international entertainment touring circuit and the audiences will have the opportunity to witness the world’s most talented performers and sporting events in the heart of Dubai. Dubai Arena will also ensure Meraas and its partners are in a strong position to be able to continue setting new benchmarks in leisure and entertainment regionally, while contributing to the emirate’s continued development as a major tourism destination and boosting the city’s appeal as a place to live, work and visit among residents and tourists.”

Images: The planned interior of the new Dubai Arena.