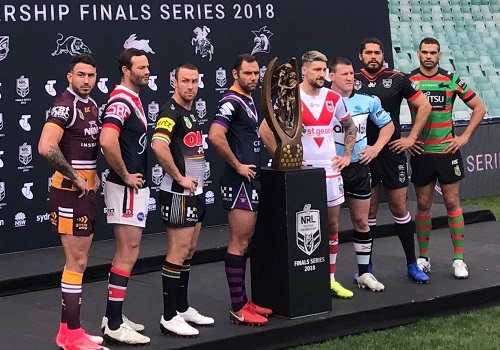 NRL sponsor Telstra has been reported as advising that bad behaviour by NRL players during the code’s ‘summer from hell’ has damaged its brand.

Revealed this week in Court documents in the response filed by the NRL into Jack de Belin’s Federal Court appeal filed over the NRL’s no-fault stand down policy, the NRL said Telstra raised serious concerns its brand was being ruined by the governing body not cracking down on players behaving badly.

The NRL enacted its no-fault stand down policy in March, which forced de Belin off the field while he goes through the Court system on aggravated sexual assault charges.

As reported by the Illawarra Star, De Belin lost his legal challenge against the no-fault stand down policy in June, and filed an appeal in the Federal Court against Judge Melissa Perry’s decision.

In his appeal de Belin argued the judge was wrong by finding the public and media would think, despite the presumption of innocence, that he sexually assaulted the 19-year-old complainant.

In its response the NRL argued that when players are charged with serious offences, it has a negative effect not just on the player and his club, but the NRL as a whole.

The NRL’s submission advised “over the last three years the elite men’s rugby league competition in Australia and New Zealand has been beset by a series of scandals involving player misconduct and allegations of player misconduct.

“Many of these incidents have involved violent assaults, particularly against women.”

The submission branded the 2018 off-season the ‘Summer from Hell’ after a string of high-profile players, including de Belin, were accused of serious acts of violence and misconduct against women.

After news of the ‘Summer from Hell’ and de Belin’s sexual assault allegations broke, the NRL said one of its major sponsors Telstra expressed concerns that its brand was being ruined by the governing body not cracking down on players behaving badly.

The submission continued “Telstra - the naming rights sponsor of the NRL having a week earlier privately complained of reputational damage to their brand and demanded tough action publicly congratulated the NRL ‘on their strong stance, reflecting community standards and moving closer to the values that Telstra upholds’.”

NIB Chief Executive Mark Fitzgibbon also emailed his NRL counterpart Todd Greenberg during the de Belin fallout, with the submission revealing sponsorship was at risk if something was nothing was not done about poor player behaviour.

Commenting on this, the NRL submission advised “as a result of the clear association between the player and NIB’s logo in photos printed in the media.”

The submission stated that White Ribbon, a campaign calling for an end to violence against women, contacted the NRL shortly after de Belin was charged, stating it was “concerned about the recent trend of allegations of abuse against multiple NRL players, and believe the alleged behaviour is unacceptable.”

Following the adoption of the stand-down rule White Ribbon commended the NRL’s decision and said it showed a “commitment to zero tolerance of any kind of abuse, disrespect or violence against women.”

Domestic violence organisation Our Watch also jumped to the defence of the NRL on the enactment of the rule, labelling it a “courageous” show of leadership.

The submission revealed it wasn’t just charities and large corporations worried about de Belin’s charges, with fans of the game also raising concerns about player “indiscretions”.

Prior to the judgment, more than 80% of emails from fans to the NRL clearly supported the stand down of players charged with serious criminal offences, including de Belin.

Representatives from a number of clubs were reporting to the NRL that they were struggling to sell key sponsorship details, according to the submission, which they considered to be a likely consequence of the reporting of player misconduct,

In its submission the NRL said de Belin’s appeal should be dismissed, noting the allegations he is facing were “contrary to the game’s values” and attracted extensive negative media attention which could have a damaging impact on the game.