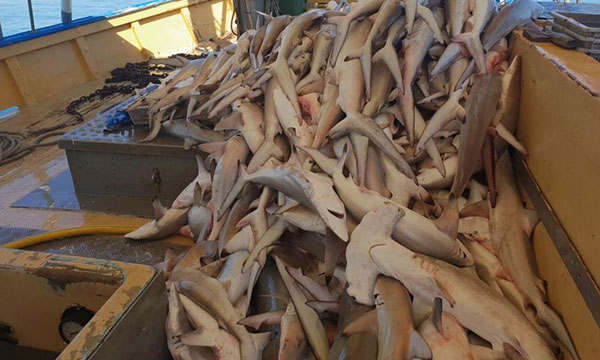 The AMCS highlights that the Queensland Government's failure to protect the Great Barrier Reef from unsustainable fishing forced strong action from Minister Ley.

This is because the Queensland government has failed to meet sustainability conditions for the ECIFFF agreed upon by both governments two years ago.

It means commercial fishers operating in the fishery will not be able to export seafood internationally, but does not affect domestic trade. Exports include shark fin from sharks caught within the World Heritage listed Great Barrier Reef, black jewfish bladders exported for use in the cosmetics industry, and mullet roe.

Poor practices in the ECIFFF have led to the deaths of thousands of endangered sharks, sawfish, dugongs, dolphins and turtles on the Great Barrier Reef.

Campaign Manager Tooni Mahto notes “Appalling unsustainable practices including the dumping of thousands of endangered hammerhead sharks, illegal shark finning and the bycatch of dugongs and snubfin dolphins in gillnets have been exposed within this fishery, which operates within the supposed sanctuary of the Great Barrier Reef.

“This extraordinary area should be where we find the best fishing practices in the world, practices which work to protect ocean wildlife and sustain the thousands of people across industries like tourism, who depend on our Reef for their livelihoods. Instead, the failure of the Palaszczuk Government to meet environmental conditions such as improved monitoring fails the Reef, the commercial fishing industry and the Queensland community.

“Minister Ley was left with little choice but to step in and revoke the export accreditation, and we fully support her actions.”

Mahto said she hoped the move would encourage the Queensland government to meet the conditions and added “we would hope the Premier and Minister Furner will do what they can to ensure compliance so commercial fishers can regain their export licences and begin trading again before they lose those markets. They can only do this if the sustainability of the fishery is improved.

“The Palaszczuk government only have themselves to blame for this issue. They have had plenty of time to comply with the conditions and nearly two terms of government to address community expectations for sustainable fishing in the Great Barrier Reef.”