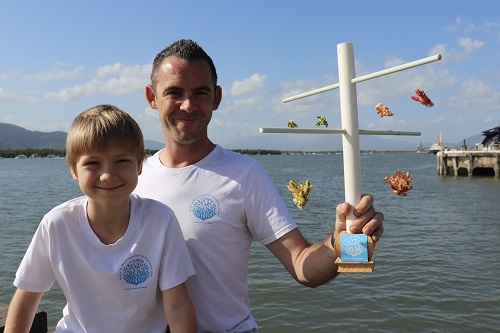 A Coral Crusaders campaign has been launched to expand an Australian-first program on the Great Barrier Reef that helps accelerate the recovery of high-value reefs damaged by coral bleaching.

Foundation Chief Executive Stewart Christie invited the public to join the Coral Crusaders campaign and be the first generation to adopt coral grown on the World Heritage-listed Great Barrier Reef.

Christie explained “Reef Restoration has worked with scientists to establish the Fitzroy Island nursery where corals harvested from reefs that survived two years of high water temperatures are attached to underwater coral trees and grown for around eight months before being transplanted on a nearby degraded reef.

“Most Australians have a deep affinity for the Great Barrier Reef and are seeking tangible actions to make a difference so the Foundation is inviting individuals, community groups and the corporate sector to adopt the coral we grow.

“Allowing coral adoption will give more people the opportunity to be part of the generation of action and restoration on the Great Barrier Reef demonstrating that many small actions can combine to create tangible positive impacts.

“The survival and future of coral reefs are reliant on taking action to address climate change, improve water quality and to regenerate damaged reefs to give them the best chance of survival.

“Reef Restoration Foundation’s goal is to grow 25,000 new corals on the Great Barrier Reef by 2021 as part of our vision to accelerate the recovery of damaged high-value reefs and strengthen the Reef’s resilience.”

The Coral Crusaders initiative coincides with a NAB social media brand campaign launched to raise awareness of how NAB is ‘Working with the people who make a better Australia’ through their community partnerships.

Reef Restoration Foundation is a recipient of a NAB Foundation Sustainable Regions grant and part of the social media campaign at www.nab.com.au/workingtogether.

For more information go to www.reefrestorationfoundation.org